You are here: Home / Fantasy / The Demon of Blackguard Hall: A Gabrielle Warwick Demon Hunter Novel by Bronwen Skye 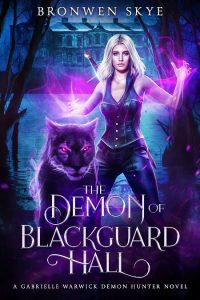 About The Demon of Blackguard Hall: A Gabrielle Warwick Demon Hunter Novel by Bronwen Skye

She’s a demon’s worst nightmare. But portals to the underworld go both ways…
Witch Gabrielle “Elle” Warwick loves the thrill of the chase. Along with her ragtag team of paranormals, she dispatches a ruthless creature to the Netherworld and ignores his warnings of hellish retribution. But when Elle investigates a string of missing students, the fearless demon hunter realizes their manhunt just shifted into a black-magic drug ring.

As Elle and her vampire partner go undercover at a nearby university, she fears that a scratch from the local wildlife might be more supernatural than it seems. With the terror of an unexpected transformation close at hand, the determined witch must keep her cool to stop a devilish conspiracy from opening the portal to hell.

Can Elle take down the operation before a demon army overruns humanity?

The Demon of Blackguard Hall is the first book in the action-packed Gabrielle Warwick Demon Hunter urban fantasy series. If you like dark battles, magical special ops, and a splatter of wry humor, then you’ll love Bronwen Skye’s pulse-pounding novel.

Buy the book, and follow the author on social media:
Learn more about the writer. Visit the Author’s Website.
Get This Fantasy Book From Amazon.

Author Bio:
Bronwen Skye has starred in commercials, music videos, and made for TV movies. She earned her fine arts degree in Theater from Marymount Manhattan College in New York City. She is the author and contributing author of several books, including fiction, nonfiction, and satiric poetry.

True to having broadened her horizons at an early age by spending some of her developmental childhood years in Africa, she is a professional traveler, and vegan food connoisseur. Following a move to Southern California, she wrote and hosted a radio show called Insight on AM 1460, and wrote an Op-Ed piece for the Santa Monica Outlook.

When she’s not traveling around the country, she spends her time reading and writing urban fantasy, and practicing circus style acrobatics. A fanatic for all things Disney, she now lives in the Sunshine State with her three rescued felines and one rescued husband.