You are here: Home / Featured Books / The Celtic Cross Killer by Keiron Cosgrave 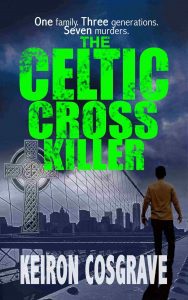 About The Celtic Cross Killer by Keiron Cosgrave

It is January 2005. New York is blanketed by snow. A killer driven by hatred roams the streets of Brooklyn.

Brooklyn pizzeria owner Ernest Costa leads a normal life. His business is thriving. He has a beautiful wife, and everything to live for. Returning home from work one freezing night, his life is snuffed out by a brutal and frenzied knife attack in a dark alley. His throat is slashed. A Celtic cross is slit deep across his back. Is the cross the signature of a psychopath? A recidivist who will strike again? Or is it an isolated attack? Someone knows the killer’s identity…

Two years pass. The murder investigation stalls. Fingers are pointed at the senior detectives leading the manhunt. Removed from the case by his superiors, disgruntled NYPD Detective Antonio Pecarro decides to leave the force he once loved. He resigns and sets up as a private investigator.

Another body defiled with the same signature is discovered within sight of the victim’s home. The victim’s wife witnesses the killer leaving the scene. The killer’s modus operandi is identical. Both victims are of Italian American heritage, of similar age and social standing. Is there a deranged serial killer driven by a compulsion to kill and bad blood walking the streets? Someone who will only stop killing when they are captured?

The heartbroken wife of the second victim decides to take matters into her own hands. She commissions P.I. Antonio Pecarro to identify and apprehend her husband’s killer.

Another murder striking at the heart of the NYPD occurs…

Will Pecarro solve the riddle before the NYPD and catch the serial killer before he strikes again?

The Celtic Cross Killer is a complex fast-paced historical crime thriller with a twist that will keep the reader guessing until its breath-taking climax.

Author Bio:
Hi, let me introduce myself.
I’m an Anglo/Irish author at the start of my author career and I’m looking for a long and happy relationship with my readers.

My first book, Promises, Promises, was published in January 2018, and is Book One in the DI Alan Wardell crime series and along with Book Two—With Menaces and Book 3—Beyond Absolution – which quickly became a UK Best-Seller in the summer of 2018.

The Celtic Cross Killer is my first standalone crime thriller and will take the reader on an epic journey from Brooklyn to London and Italy… and back again.

I‘m born and bred in Yorkshire, England, and live with my partner of 17 years, Christine. We have three grown up son’s between us, and very recently became grandparents to twin girls (0:

I love to hear from my readers so please feel free to get in touch via my website or Facebook page.