You are here: Home / Fantasy / The Bow of Hart Saga Complete Series by P. H. Solomon 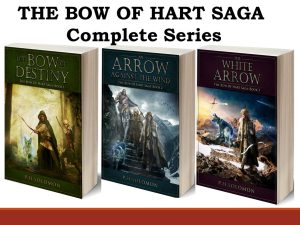 Haunted by his past. Hunted in the present. Uncertain what is real.

Athson suffered hallucinations ever since he was orphaned, including a dog no one else sees. The will in his possession, bestowed in a dream, can’t be real. But the trolls now hunting him are. A destiny, both inconvenient and unavoidable, drags Athson into an unwanted quest that challenges all his assumptions.

Can he trust anyone?

Sworn to secrecy by his dead father about the bow, Athson wants nothing to do with it. A dragon and a wizard want the bow – and Athson dead. Running from the quest and his destiny are tempting options.

Then he finds something unexpected.

Will his discovery destroy him before he recovers the bow?

If you love classic fantasy with new ideas, read The Bow of Destiny because it’s quietly addictive.

Author Bio:
P. H. Solomon loves reading and writing fantasy of all kinds, especially epic fantasy. If a book has dragons, elves, dwarves, wizards, magic or mythical creatures, it’s in his reading zone. He lives in the greater Birmingham, AL area where he strongly dislikes yard work and sanding the deck rail. However, he performs these duties to maintain a nice home for his loved ones as well as the family’s German Shepherds. In his spare time, P. H. rides herd as a Computer Whisperer on large computers called servers (harmonica not required). Additionally, he enjoys reading, running, most sports and fantasy football. Having a degree in Anthropology, he also has a wide array of more “serious” interests in addition to working regularly to hone his writing. His first novel, The Bow of Destiny was named 2016 Book of the Year by Fantasia Reviews and is the first book of The Bow of Hart Saga. The sequel novel, An Arrow Against the Wind, was released in April of 2017. The third book of the series, The White Arrow, was released during October of 2017. P. H. Solomon also authored the award winning short story, The Black Bag, which won best published short story at SCWC 2012. P. H. is also a member of Science Fiction and Fantasy Writers of America (SFWA).