You are here: Home / Action & Adventure / Ten Minute Tales of the Old West by Ramsey Brewster 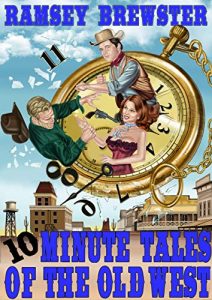 Ten Minute Tales of the Old West by Ramsey Brewster

A rip-roaring collection of western short stories free of sex, swearing and slow-moving filler describing every rock, bush and cactus in the desert.

It’s action, adventure, and drama at its finest featuring good guys standing tall against bad guys at their dastardliness.

Author Bio:
Ramsey Brewster brings to the table a love of the traditional western over writing modern thrillers where the hero can count on cell phones, computers and satellites to get them out of a jam.

Writing tales of the wild and woolly Old West allows for the white hat, good guys, to rely on quick wits, their own two fists and a trusty six-gun versus black hat bad guys!

Join Ramsey for a return to the 19th century to before the closing of the frontier, a land where men were men and heroism ruled the day!