You are here: Home / Featured Books / Songbird by Inger Wolf 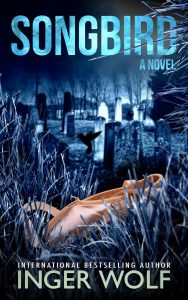 About Songbird by Inger Wolf

A thrilling Scandinavian mystery.
From an international best-selling and award winning author.
On an early morning in May, the police find the heavily beaten body of Maja Nielsen in a public park in central Aarhus in Denmark.

She has fallen from a great height and her right arm has been cut repeatedly. Everything points to a suicide, and as the police dig deeper into the world of Maja, they discover a young woman plagued by paranoia and violent nightmares.

Something was tormenting her.

The investigation leads Daniel Trokic and his team to a distinct blood profile with traces of an unknown drug, a tattooed Colombian, and a particularly uncompromising animal rights activist who has been run over in a hit-and-run accident.

SONGBIRD is the third book in the bestselling Scandinavian mystery series about Police Inspector Daniel Trokic, his colleague Lisa Kornelius, and the rest of the investigative unit at Århus Police station. If you like Stieg Larsson and Scandinavian mysteries, then you’ll love Inger Wolf’s spine-chilling who-done-it.

Her first mystery novel, Dark September, for which she was awarded the Danish Crime Academy’s debut prize, was published in 2006. Since then, her bestselling books have been translated into several languages.

She loves to travel and get inspiration to her books from all over the world, but lives in the outskirts of the town of Aarhus, the second largest city in Denmark, close to the forest and the sea. In this beautiful place, she got a degree in English and worked as a translator for many years.

Today, Inger Wolf works as a full-time author. The household also includes a dog called Harry Hole, named after one of her favorite detectives, and a cat called Mis (Kitty).