You are here: Home / Featured Books / Slavery and Beyond: The Complete Series Collection by A. Robert Allen 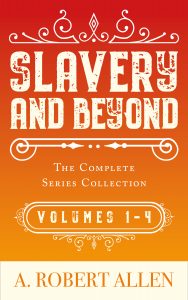 Slavery and Beyond: The Complete Series Collection by A. Robert Allen

Experience the NYC Draft Riots of 1863, the building of the Brooklyn Bridge (1883), the General Slocum Steamship Disaster (1904), and the Tulsa Race Riots of 1921 through the eyes of passionate heroes. Complete four-book box set. 400+ reviews on Amazon and Goodreads with an average rating of 4.4. Regular price $9.99. Discounted to $4.99 during the week of August 17th.

Author Bio:
A. Robert Allen has published four novels and two short-story prequels in his Slavery and Beyond series. All are stand-alone stories connected by theme. He writes historical fiction that transports readers to times and places immediately before or soon after the end of slavery. A. Robert is a long-time higher education professional and resides in New York. The first volume in the series, Failed Moments, is a fictional account of Allen’s ancestors in 1790 during the slave revolution in what would become Haiti and later in 1863 during New York’s Draft Riots. The second volume, A Wave From Mama, immerses readers in racially charged post Civil War Brooklyn and gives an interesting look at the building of the Brooklyn Bridge. The third book in the series, Minetta Lane, takes place in 1904 in a downtown New York neighborhood that lives by an unusual race-based code. The prequel to this third volume, Minetta Mornings, takes place twenty-five years earlier. His most recent release, Living in the Middle, transports readers to perhaps the most violent and significant incident of racial violence in U.S. history, the Tulsa Race Riots of 1921. The prequel to this novel, which takes place in 1896, is entitled Ticket to Tulsa.