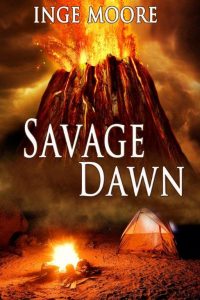 About Savage Dawn by Inge Moore

It began with a camping weekend at Dease Lake caves.

No one realized that nearby Mount Edziza was boiling and about to erupt.

Joining forces with others who sought shelter at the caves, Karen and her group of battered survivors fought to live on under almost impossible circumstances. Not only had Edziza erupted, but so had a string of other volcanoes around the world, resulting in a devastating volcanic winter.

Violent human conflicts, ecological disaster, and shifting alliances abound. Now the group’s future rests in their own hands. They must discover what events have brought about the apocalypse. Because if they don’t understand what’s happened in the past, there will be no future.

Savage Dawn is a post-apocalyptic tale of chilling survival and sizzling romance, set in the Canadian wilderness.

Get it now, while it’s on sale.

Author Bio:
Inge Moore studied creative writing at both the undergraduate and post-graduate level at the University of Alberta. There she worked with such revered writers as Governor General’s Award Winning author, Rudy Wiebe.

She also holds a Bachelor of Science Degree (Zoology) from the University of Guelph. Over the years she has worked as a biologist, a research scientist, an economic development officer, an office manager, an immigration officer, a financial officer, a writer, and an equestrian.

Moore’s short stories have been published in numerous magazines and have been broadcast on radio. She received First Prize in the 1986 Annual Writers’ Digest Short Fiction Competition. She has several books available on Amazon, including 22 short stories, two short story collections and three novels.

Moore has spent most of her life in Canada, moving between Alberta, the Northwest Territories, and Ontario, and has also lived in Austria and Great Britain. Currently she resides in a small town in Ontario, Canada. She enjoys nature, horses, dogs, art, reading, and, of course, writing.