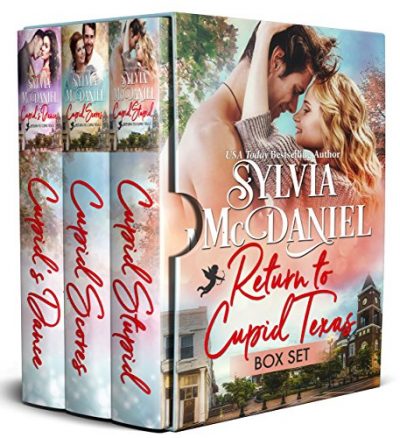 The First Three Books in the Return to Cupid, Texas Series
Nothing says bad judgement like trying to prove a superstition true…

Taylor Braxton, along with a few adventurous girlfriends, decides to test one such superstition on Valentine’s Day – the day Taylor’s ex-fiancé is to be married. A few bottles of wine help lower her inhibition and go a long way to giving her the courage to try to heal her broken heart. After all, Taylor reasons, what is the worst thing that can happen – the superstition of finding her true love might come true?

Sheriff Ryan Jones is used to getting calls about the odd dancing around the downtown fountain. When you live in Cupid, Texas, there were always some residents who believed if you dance naked around the fountain, you were guaranteed to find your true love. What he doesn’t expect is to find the lovely, but spirited, Taylor Braxton confronting him at midnight – sans clothing. Unfortunately, a long-held promise and his badge stand between him and what he wants – Taylor.

Will the Cupid Superstition help Taylor and Ryan overcome the past and take a chance on love again? Or will a promise he made to her best friend, and his career, deflect Cupid’s arrow?

Dancing naked around Cupid’s fountain seemed like a good idea…until the law showed up.

Meghan Scott is not a typical school librarian. When her girlfriends convince her to test the Cupid superstition and dance naked around the statue, she reluctantly agrees. Eager to find her soulmate and start a family Meghan reasons, nothing else has worked.

Former professional football player, Max Vandenburg can’t believe his eyes, when he sees Meghan Scott running down the street naked. Seven years ago she broke his heart and did the unthinkable. Rescuing Meghan is the first step in finally learning the truth, but when she refuses to discuss the past, can he charm the real story from her?

When Cupid’s arrow is aimed straight at their hearts, can two high school sweethearts learn everything in the past is not what it seems?

Will dancing naked around Cupid’s fountain bring love…or only heartache?

Much to her overprotective brothers dismay, Kelsey Lawrence seems to attract trouble. After two bottles of wine, her girlfriends convince her to test the Cupid superstition. Except the law shows up sending her fleeing in her birthday suit, running into the arms of her brothers best friend.

Cody must be dreaming when he sees Kelsey Lawrence running down the street bare assed naked. The strictly off limits, pampered sister of his best friend has always gotten into mischief, but this time she’s gone too far. When the lovely and spirited Kelsey convinces him to let her stay at his place…the adventure begins.

Have they fallen under the Cupid superstition and found a lasting love?

Buy the book, and follow the author on social media:
Get This Romance Book From Amazon.
Visit the Author's Facebook Fan Page.