You are here: Home / Featured Books / Return to Autumn by Rusty Blackwood 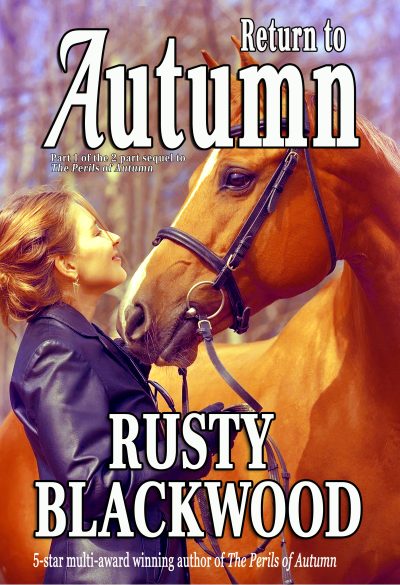 Return to Autumn by Rusty Blackwood

Are you ready to take the ride throughout the pages of this long-awaited two-part sequel to the 5-star, multi-award-winning romantic fiction drama, The Perils of Autumn? The Meadows of Kentucky awaits your return.

The first, the anticipated romantic fiction drama, Return to Autumn, picks up four years later, and sweeps you back to the often-perilous life at Landon Lawns Stables. It is now April 1976, and life at Landon Manor has carried on for Autumn Leeves-Landon, and her mature husband, Cyril, along with their young daughter Abby, and their astute, devoted housekeeper and friend, Agnes Harris.

Life in the Thoroughbred stables has also carried on for head groom and trainer, Manfred Montgomery, and stable foreman, William Brown, as they continue their ingoing quest to bring Duff Taylor, Landon Lawns’ exclusive jockey, to justice for suspicious involvement in an unsolved racing incident from his past. However, Duff has managed to add to his growing page of secrets, that of which is about to be revealed within these exciting pages.

Get This Romance Book.

5-star-multi-award-winning Canadian indie author, Rusty Blackwood, was born October 5th in St. Thomas, Ontario, Canada, and grew up on her paternal grandfather’s farm in the County of Elgin, located in the south-western portion of the province where she developed a growing love for literature and the written word while still in elementary school. Though unprofessionally trained in the field, Rusty has always had a talent for expressing her imagination in ways that are uniquely her own, and she has demonstrated this ability many times since becoming a self-published author in 2011.

She attributes her passion for expressive writing to her late father, James Beecroft, and to her late elementary school teacher, Gladys Carroll, who encouraged her to enter her original compositions into county fairs, school contests, and whatever venue allowed participants into the vast field of writing. She has carried that love ever since, putting it to use many times since becoming a serious writer in 2001. According to Rusty, the flair for fantasy is anything the mind wishes it to be, and she is a master at this. Within the avenues of her expressive mind is found an endless array of romance, passion, textures and colours to sweep the reader to exotic, faraway places where anything is possible.

Rusty is often asked how much of herself is found in her heroines, and she has been quoted to say “a fair amount”, adding that most writers inspiration comes from many different aspects of their life experiences, using them to their best advantage, and with nine published titles to her name thus far, ranging from poetry, children short-stories, adult comedy, and romantic fiction drama, there is no denying Miss Blackwood loves what she does.

From the time of her youth, Rusty has loved the Arts in their many interesting forms. She holds two Interior Decorating and Design diplomas, and spent countless years on numerous south-western Ontario stages performing with her family’s country music band, ‘The Midnight Ramblers’, followed by the country – rock – blues band, “MIRAGE”, as an accomplished vocalist, bassist, and rhythm guitarist. She now resides in the cultural city of St. Catharines, Ontario, and when not at her keyboard, enjoys art, music, nature, gardening, and spending quality time with family, and friends.