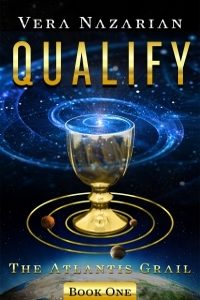 About Qualify (The Atlantis Grail Book 1) by Vera Nazarian

Now optioned for film! International cross-genre phenomenon!
* * *
The Asteroid is coming.
You have two options. You die, or you Qualify.
* * *
Nerd, geek, and awkward smart girl Gwen Lark must compete against other Earth teens, including her sexy high school crush Logan Sangre, in order to Qualify for interplanetary rescue from an asteroid apocalypse, in this bestselling, high-octane dystopian adventure series, now optioned for film as a feature film series or TV series, from a Nebula Award Finalist and Dragon Award 2018 Finalist, in the vein of DIVERGENT and THE HUNGER GAMES.
* * *
The year is 2047. An extinction-level asteroid is hurtling toward Earth, and the descendants of ancient Atlantis have returned from the stars in their silver ships to offer humanity help.

Author Bio:
VERA NAZARIAN is a two-time Nebula Award Finalist, 2018 Dragon Award Finalist, award-winning artist, a member of Science Fiction and Fantasy Writers of America, and a writer with a penchant for moral fables and stories of intense wonder, true love, and intricacy.

She is the author of critically acclaimed novels DREAMS OF THE COMPASS ROSE and LORDS OF RAINBOW, the outrageous parodies MANSFIELD PARK AND MUMMIES and NORTHANGER ABBEY AND ANGELS AND DRAGONS, and most recently, PRIDE AND PLATYPUS: MR. DARCY’S DREADFUL SECRET in her humorous and surprisingly romantic Supernatural Jane Austen Series, as well as the Renaissance epic fantasy COBWEB BRIDE Trilogy, and the high-octane adventure YA / teen dystopian apocalyptic science fiction series THE ATLANTIS GRAIL that has been optioned for film, and is in development as a major motion picture franchise or TV series.

After many years in Los Angeles, Vera lives in a small town in Vermont, and uses her Armenian sense of humor and her Russian sense of suffering to bake conflicted pirozhki and make art.