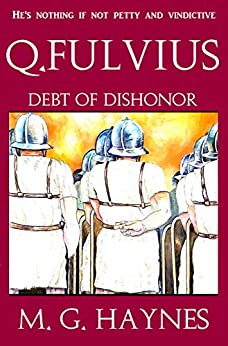 In Rome, 216 BC, Fulvius is a murderer, a thief, and condemned to die. Saved by the catastrophic defeat of the Roman Army at the hands of the Carthaginian General Hannibal at nearby Cannae, he’s forced into the legion and an altogether unfamiliar world of soldierly duty and honor. Realizing promotion as unexpected reward for paralyzing fear, Fulvius finds the Army not so dissimilar to the shadowy Roman underworld he knows so well and schemes to make the experience worth his while. He betrays, and is in turn betrayed, in a whirlwind cycle of threat, violence, and criminality leading to an ultimate showdown and reckoning that could undermine the entire war effort. Hannibal is no doubt coming, but that may be the least of Rome's troubles.

Author Bio:
M. G. Haynes is a 26-year veteran of the U.S. Army. Born in Columbus, Wisconsin in 1972, the Army Brat is a 1994 graduate of the United States Military Academy at West Point. A Field Artilleryman and Northeast Asia Foreign Area Officer, he's served for over eleven years in Japan, six years in the Republic of Korea, and deployed for one year to Kabul, Afghanistan. Most of the remainder of his time in the Army was spent in Alaska, California, and Hawaii.

Over the years he's studied German, Arabic, Hebrew, Korean, and Japanese languages. He currently maintains proficiency in Korean and Japanese. He holds a B.S. in Military History from West Point and an M.A. in Asian Studies from the University of Hawaii.

He currently lives in Tokyo, Japan with his wife of 24 years, Jung Min Haynes, and three-legged rescue cat Jinx.