You are here: Home / Fantasy / Project Chrysalis: End of an Era by John Gold 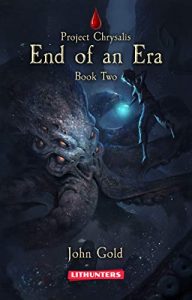 About Project Chrysalis: End of an Era by John Gold

This world is bigger than you could ever imagine. Chrysalis is full of danger, giant raid-bosses, guilds of skillful fighters and gods, whose power is both enormous and infinite. Too bad Anji has unwillingly crossed the path of so many of them.

His simple wish to be happy with at least virtual parents has turned into a disaster. To delete the character and start over again was the simplest way out. But not for Anji. He has already faced Death himself, walked over fire fields of Hell and his crusade is far from over.

In order to face this world with his head held high, Anji will do his best to become stronger, no matter what it takes him, no matter how much of forbidden magic he will have to use. Even if it means becoming a monster people fear more than Death.

Still, Anji’s social skills, psychological and emotional conditions continue to worry adults. Betrayed and wounded so deeply by people he thought he could trust, will he ever be able to communicate properly, to find his own place in a real world… to find someone, anyone, to trust, a friend, a comrade-in-arms? And what if that friend is not quite human?

Life changes for those who are full of determination and ready to act. And Anji is not the only one willing to fight for his selfish goals. The world of Chrysalis is at the edge of a new era. The hordes of undead, led by ancient gods, prove again and again how easy it is to tear apart young guilds. This is not a war fought by humans, as they might have led you to believe; this is a sphere for the gods to fight.

“Project Chrysalis: End of an Era” is the second book in the new exciting LitRPG and Gamelit series for teens, young adults, gamers and fantasy lovers by John Gold. Still, the central question for every reader is: can we really call it a game anymore? Is it even a virtual reality at this point? It is more complicated than it seems and in the second book, the author raises the curtain of mystery a little higher, slowly revealing the underlying truth. Go ahead and take a peek.

Author Bio:
“To face Death itself, to hide from deadly guards, to conduct dark rituals and to use forbidden death magic? Being sent to Hell is definitely not what 12-year-old Anji would have ever expected from a government orphanage program.

Chrysalis — the project of the century. It is a hyper-realistic fantasy RPG game, set in the Middle Ages. Leveling up, distributing attribute points, and choosing your way of life are only a few ways the players play the game. Chrysalis is the perfect virtual space where every orphan under the care of the government is placed in an in-game family to receive all the love and care of parents they so desperately need. This project helps kids socialize and mold them into the adults of the future. They are in charge of how they grow up in the virtual space, which was built to advance society.

But something went seriously wrong for Anji.

He has lost everything that he had been so happy to finally receive. Now, instead of a loving mama and strict but generous father, he has bloodthirsty demons and flesh-eating worms. Instead of fishing and baking lessons, he has to perform bloody rituals to survive the nine circles of Hell. Instead of the dreams of a happy childhood, his wounded child’s soul suffers demonification.

Betrayed, for the sake of someone else’s master plan, he appeared in the most hopeless place of Chrysalis. It is full of ash, despair and… possibilities? Sagie, Anji’s in-game username, fueled by homesickness and revenge, will go through the Hell to face what is hidden in the darkest corners. The road will be long and difficult, but those who can, do.

Once, long ago, the first wave of Wanderers appeared in the world of Chrysalis. They had proved themselves by killing the ancient gods. Now it is time for the second wave of Wanderers and for new young gods, dreaming about a wide-scaled and deadly war. The beta-test is now open to people. While they are “playing” in Chrysalis, they have no idea about the truth behind the Project.

Project Chrysalis: Book one: Gestation is the first of four books of a brand new LitRPG series. This is a story of a battle for your dreams. It is full of turns, twists, riddles, and revelations; it is a story of… Oh, sorry. No spoilers today.

The story of Sagie has just begun.
But first, one line of advice: do not believe your own eyes.