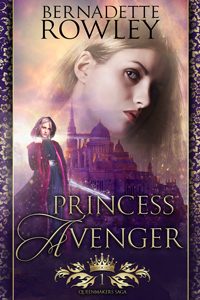 About Princess Avenger by Bernadette Rowley

…an avenging princess, determined to protect her people from tyrannical father. Alecia’s only worth is to have a son, who will be heir to the kingdom.
…a dangerous shifter, tasked with guarding a princess who refuses to be shielded from danger. Vard’s dark secret could spell the end of the woman he’s sworn to protect.
And yet, when thrown together, neither of them can deny the forbidden attraction. As their lives spin out of control, will love be enough to pull them from the vortex and perhaps save the kingdom?
Princess Avenger is the first book in the epic Queenmakers Saga, combining the sweeping high fantasy world of Thorius with sizzling romance. If you like magic, political intrigue and mythical creatures, wrapped up in a ‘beauty and the beast’ love story, then you’ll adore Princess Avenger.
This book contains sex scenes and is intended for mature readers.
Princess Avenger is in Kindle Unlimited and is currently available at $0.99

Author Bio:
Bernadette Rowley is a lover of epic fantasy who is a veterinarian by day and an author by night. She is currently published in the genre of high fantasy romance with eight books, all set in her fantasy world of Thorius.
When she was a young teenager, an aunt gave her a copy of The Sword of Shannara by Terry Brooks and Bernadette has lived in various fantasy worlds ever since. It’s no surprise that her chosen genre when writing romance is fantasy.
“I can see these settings so vibrantly in my mind and hope my readers can too.”
But Bernadette has no desire to spoon-feed her readers by laboriously describing her fantasy settings. She would rather the reader use their own imagination a little.
Along with sword and sorcery, dashing heroes and stunning heroines, this author includes strong healing themes in many of her books- an element which is central to her everyday job.
“When I started writing the Queenmakers Saga, I never imagined my day job would force its way into my stories as it has.”
And of course, there are animals, especially Bernadette’s beloved horses.
Bernadette lives in Brisbane, Australia, with the four heroes in her life- her husband Michael and three grown sons.