You are here: Home / Featured Books / Portal by David Mayo 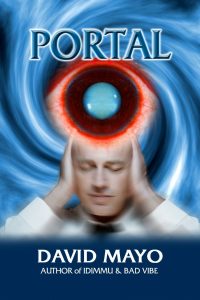 Jagger Daines is in a living nightmare. He lost his parents in a horrifying auto crash that left him in a coma. Once awakened, he was inexplicably stricken by epilepsy and a strange immunity to all drugs. It was a singular miserable existence, self-exiled in his lonely home, his only companions the constant seizures.
Then came hope in the form of a new quantum formulated drug and protocol. However, his newfound optimism crashes in on itself as something savage and unexplained enters the world through his quantum-modified brain.
The evidence forces him to conclude that he has somehow become a portal, a reality no one else is willing to believe in.
For Daines, it becomes a race against time before the portal opens wider and more innocent lives are consumed.

Author Bio:
David Mayo was born in 1950 in Houston, Texas. His earliest career was as a Data Processing Specialist, the precursor to modern day computing. Within 20 years he was running IT departments and began a new career in Technical Writing. That led to a long stint in the medical industry. He has been an MIS Director, the head of a large Project Management Office and a contract technical writer. Of course, now he is an author. When he retired in 2016, he decided to plunge full force into writing. As of 2019, he had three published novels. He hopes to complete his fourth and fifth in 2020.
David has published poetry and dabbled in screenplays. He has authored numerous manuals, handbooks, commercials and speeches.
He is a voracious reader and enjoys playing acoustic guitar. For a time in the 1990s, he was the editor of a globally well-received UFO monthly newsletter. He lives in Eastern Texas with his wife and for a time, two beautiful loving dogs. They crossed the rainbow bridge and he misses them deeply.
All of Mr. Mayo's book covers are designed by Prometheus Productions.