You are here: Home / Featured Books / Point Lookout: Where Evil Crosses Over by Adamo Cultraro 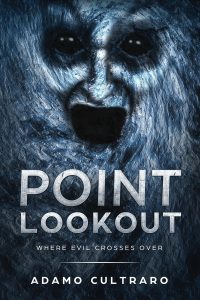 About Point Lookout: Where Evil Crosses Over by Adamo Cultraro

When eighty year old Mrs. Tadwell is not only found dead but brutally disemboweled, Sheriff Julius Barnes finds himself with the biggest case in the history of tiny Point Lookout. Sure, Barnes had bitched about not having enough to do over the years, but after the town pastor rapes Tadwell’s corpse instead of embalming her, and then hangs himself, Barnes realizes he has something greater than a crime problem on his hands, with all signs pointing to a supernatural malevolence at work.

As Sheriff Barnes decides to swallow his pride and reach out to the FBI for help, people start missing, others have bizarre visions, and more bodies turn up. When the FBI finally does arrive, it sends a disinterested slacker who is short on time and even shorter on answers, forcing Barnes to look to more unconventional sources for some knowledge as to what is afoot in town. This help comes from the most unlikely place: Benjamin Olivera, Barnes’ across the street neighbor, who is supposed to be a retired master machinist, apparently holds a dark secret that he has revealed to no one for the past forty years – he is a former Jesuit priest who abandoned his vows.

Seeing a pattern within the deaths and strange occurrences, Olivera comes to the inescapable conclusion that the devil himself has specifically chosen the town due to its isolation to bring forth the child who will become the Antichrist. As a pervasive evil invades and dominates the town, Barnes and his deputy dig deep to defend their town, battling the very legions of hell.

Author Bio:
Adamo Cultraro has been writing since the age of ten, when he was creating vampire novellas before the genre was popularized. A working writer, director and producer in Hollywood, Cultraro has had two produced screenplays and four completed feature films to his credit, and has cast such notable actors as Stone Cold Steve Austin, Tom Sizemore, Malcolm McDowell, Whoopi Goldberg, George Takei, and Armand Assante to name but a few.

Married of 24 years, Cultraro has three children and still has a burning desire to explore supernatural horror and the things that go bump in the night.