You are here: Home / Featured Books / One August Day by Charlotte Morgan 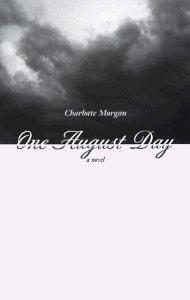 From Booklist
What a smart way for an award-winning short story writer to develop her first novel: using poignant fact to ground a flight of the imagination. Morgan, who teaches English at a Virginia community college, builds her tale around the August 1969 floods in the Appalachian foothills: when Hurricane Camille’s last gasps collided with local thunderstorms, 25 inches of rain fell on Nelson County, Virginia, in five hours (a world record), leaving 114 people dead and 37 missing. Eight flood victims–men, women, and children, aged 6 to roughly 70–were never identified. One August Day imagines what might have brought those eight to the center of the storm. A browbeaten woman grasps the damage her cruel husband is doing to their three children. A runaway teenager tries to make a place for himself. A teacher heads for a new life with the man she loves. A prison escapee plots biblical revenge. An elderly woman in intermittent contact with reality rules the ancient mansion she hasn’t left in years. A vivid and involving story. Mary Carroll –This text refers to the original publication.
This is the 50th Anniversary of the Camille Flood, making One August Day a must-read for anyone who wonders how natural disasters have an impact on those who are caught in the maelstrom.

Author Bio:
Charlotte Gregg Morgan grew up in the “Christ-haunted South” of Richmond, Virginia and was living there when the Camille Flood struck August 19-20, 1969.

Her first novel, One August Day, was nominated for the annual fiction award by the Library of Virginia. Protecting Elvis is available on Amazon or at Barnes & Noble. Kirkus Review (Oct. 19, 2016) called the novel “A subtle, affecting glimpse into the lives of a trio of singular women molded by the works and personal character of a rock icon.”

One of Morgan’s short stories is included in The Pushcart Prize Collection XXIV. She holds an MFA from Virginia Commonwealth University, where she studied with famed author Lee Smith and “Macarthur Genius” Paule Marshall.

Her fiction explores the lives of women, their compelling inner conflicts as they face the demanding struggles of complicated external lives, and the difficulty forming and sustaining independence.

She is writer-in-residence each summer at Nimrod Hall Summer Arts Program where she works with writers in all stages of their careers. She lives in Lychburg, Virginia with her artist husband John Dure Morgan and two sassy standard poodles.