You are here: Home / Featured Books / Never Split The Party by Ramy Vance 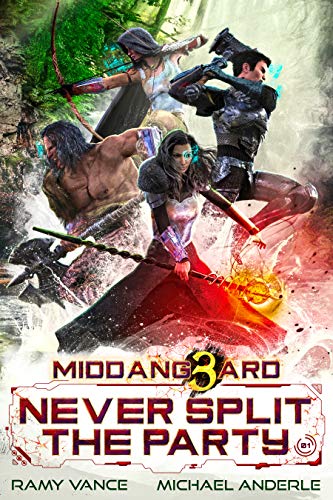 What if J.R.R. Tolkien's work wasn't fiction, but a primer to help humanity get accustomed to a harsh truth?

There are nine known realms, a world for each race, including dwarves, gnomes, and elves.

In the middle rests Middang3ard.

Each world knows the others. Each, except Earth.

Humans long ago turned their backs on magic, throwing their stock into science and technology, their governments shielding the people from the reality of what was going on elsewhere.

So be it. Humans were never very good at getting along with other races anyway.

Then the Dark One appeared, threatening to overrun the nine worlds, starting with Middang3ard and ending with the humans’ planet.

The second planet just went dark, Earth can't stay out of the fight, but can it do anything to save its own future?

Now, humans must send elite warriors to Middang3ard to fight, else humans will fight on the shores of their own lands when the Dark One invades Earth.

Too bad their elite starts and ends with Robert ‘Suzuki’ Fletcher and his team of Mundanes.

Go up and click Read Now or Click to Buy and find out why humanity has been sharing stories about elves and dwarves for thousands of years.

“It's about time the truth is told about the MMORPG games and
other fantasy tales. They weren't flights of fancy, but manuals on
how to fight in a magical world. A magical world just a portal away.
Get your gamer gear on you N00bs, class is in session.”- Dakota Krout, author and lead agent for the Humanity Preparation Program, GameLit Novels department

Author Bio:
Ramy Vance is a Canadian who lives in Edinburgh with his wife, a four-year-old demon and an imaginary dog. He enjoys a beautiful city, whisky (Scottish spelling, not mine), and long walks. He writes kickass Urban Fantasy thrillers set in the GoneGod World (and elsewhere). Currently, his greatest aspirations are writing more stories and finally get that real dog so he can have an excuse to go on even more long walks.