You are here: Home / Featured Books / My Mother Called Me Unni – A Doctor’s Tale of Migration by Dr. Venugopal K. Menon 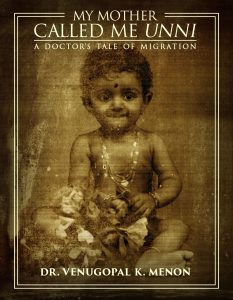 About My Mother Called Me Unni – A Doctor’s Tale of Migration by Dr. Venugopal K. Menon

It is often said that geography is destiny. My Mother Called Me Unni is the story of one man who left his homeland and his family in the 1960s to find his own destiny in the melting pot of the United States. The book was written by Dr. Venugopal Menon and published by Outskirts Press.
Beginning in the late 1960s, hundreds of thousands of people migrated to the U.S. from India, including thousands of physicians. Today, Indian Americans are the wealthiest and most educated minority group in the country. What drove them to leave their homeland? What values and experiences did they bring with them? And how are they transforming America?
Out of enigmatic experiences comes this surprising yet uplifting portrait of life, narrated by Dr. Venugopal Menon, who draws upon his cherished childhood in India and the teachings of his ancient heritage to question, understand, and ultimately assimilate into his new country, an exhilarating realization of the American Dream. This book is essential reading for every migrant who left the land of their birth in search of a different destiny, and for those who are curious to know what that’s like.
Venugopal Menon was born into a large, middle-class traditional Hindu Nair family in Kerala, India. Raised during the pre-independence years of British India, he witnessed the country gaining its freedom and the establishment of a Democratic Republic. Even with limited economic resources during the global depression, the hardship in his life was easily overshadowed by the abundance of love he received. His memoir details his happy childhood, with all its colorful festivals and traditional rituals.
The author, receiving his first pair of shoes in the sixth grade and having to use kerosene lamps before electricity came to his house, moved on to America and became the president of a nationally reputable medical clinic and a Fellow of the Royal Society of Physicians, London. As he settled in a life of luxury and prosperity, he also played a significant role in creating a standing for the Indian community in society. The narration covers the discrimination he faced in the USA, as well as amusing stories of getting familiar with the local customs and trying to become Americanized.
Venugopal established his status as a highly regarded physician, became part owner of a thriving practice, lived in a luxurious, custom-built home in a desirable neighborhood, and his children excelling in education. Then he decided to forsake all such affluence to move back to India, to be of service to the needy patients and put his foreign training to use.
The story gets complex as he earns a national standing in a newly established, eminent hospital system in India, with patients coming to see him from all over the country and his parents and large spread of family members close at hand. But due to extenuating circumstances, he is once again forced to abandon all those gains and go back to the place he thought he had left for good. And fortunately his old practice embraces him with open arms.
The book continues with his re-establishment in America, tying up all loose and lost ends, getting elected as president of the clinic for eight years before he retires. During his second inning, he becomes intimately involved in numerous social, cultural, religious, and philanthropic endeavors of the Indian community as well as of the mainstream.
The conclusion elaborates on his seven decades in different continents, about his professional, family, and social obligations, and how his life may have affected others. In his introduction, he laments his decision to leave India: “And it took several decades and intense introspection before the impact sunk in, of my role and responsibility in that act, of tearing away from our centuries-old genetic bond and its implied immensity.” But he concludes with a gracious note: “As an individual, I have remained eternally grateful to receive a life that has rewarded me with a sumptuous treat. I am convinced that I cannot ask for more or expect more, as I stay ultimately comfortable with the assurance. I am content. I am blessed.”
What makes this book unique, informative and interesting!
It is one of the first such publications from over 2.5 million Indians who have chosen the USA as their domicile.
It is the story of perhaps the ‘most educated, most successful and the most industrious’ group of migrants in the history of America.

Author Bio:
The author Venugopal Menon was born as the eldest of seven children into a conventional Hindu family in the pre-independent, colonial India. He was raised with time-tested cultural traditions during the lean economic times of WWII, getting his first pair of footwear in the sixth grade and electricity coming to his house when he was in High School. As a nine-year-old, he witnessed India gaining independence from the British. After graduation, he volunteered and served the Indian army during the Chinese invasion.
With responsibility to support his parents and younger siblings, but being ambitious to gain higher education, he left India, spent a year in Scotland before arriving in the United States. He completed his training in Pediatrics, Allergy, Asthma & Immunology, getting certification and fellowships in both. He was also invited by the prestigious Royal Society of Medicine, London and was conferred a Fellowship. He worked as an associate owner of the prestigious McGovern Allergy Clinic in Houston for thirty-five years, serving as its President for eight, before retiring. During the early eighties, he briefly went to India, establishing a department in the Apollo Hospital in Chennai.
He is married to Sreedevi for 54 years and the couple have two daughters and a son, who all are married and settled in the USA. They have six grandchildren.
Venugopal Menon, being a pioneer Indian settler of the community, has been involved in establishing many professional, civic, religious, charitable, and social organizations and served as the chairman and president of a few. He cultivated a variety of interests such as reading, writing, travel, photography, and being involved in social causes. After retiring, he wrote his memoirs as requested and encouraged by his children who felt the need for such a treatise, being a source to establish a base and trace the roots of the family between continents and cultures. He and his wife live in Pearland, in a Kerala-style home that they built adjacent to Sri Meenakshi Temple, of which he is a founder and past Chairman.