You are here: Home / Featured Books / Midnight Black – The Purge by r.j. eastwood 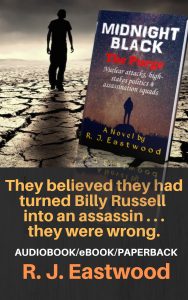 About Midnight Black – The Purge by r.j. eastwood

“When plunder becomes a way of life for a group of men living together in Society, they create for themselves in the course of time a legal system that authorizes it and a moral code that glorifies it.” Frederic Bastiat, French Economist. 1801-1850

In the 5-star suspense thriller, Midnight Black – The Purge examines in frightening detail how Bastiat’s observation becomes the law of the land in a world on the verge of moral and economic collapse.

As a condition of his parole, Billy is assigned to a secret government drug enforcement unit whose mission is to eliminate drug dealers without benefit of a trial. When approached by a group planning to overthrow the authoritarian government, Billy joins with them to end the demonic reign of tyranny only to become embroiled in the wildest conspiracy he could have ever imagined.

Eastwood’s writing has been favorably compared to author Lee Child.

Available everywhere in Audiobook, e-book, and paperback formats wherever books are sold.

“After reading Midnight Black, words that come to mind are frighteningly realistic, provoking, thrilling, current, and extremely well written. From the first paragraph on, it was a non-stop read, chapter after chapter. I anxiously wanted to get to the end but at the same time, when I got there, I wanted more.” 5-Stars. Stanley P.

During his film and television career he has written, produced, and directed feature motion pictures and television documentaries and well as national television commercials and industrial films. He created and produced the award-winning ninety-one-episode television series The Directors, the most extensive examination of film directors and the behind-the-scenes making of feature films. His award-winning four-part mini-series, The Genocide Factor, played to rave reviews on PBS stations across the country, and his 2007 MSNBC documentary For God & Country: A Marine Sniper’s Story was honored with both the National Headliner Award and the Cine Special Jury Award.

Mr. Emery’s 2017 novel, The Autopsy of Planet Earth, was awarded the 2017 Author’s Circle Novel of Excellence for Fiction, the 2018 Readers’ Favorite Award for Best Fiction, and the 2018 Book Talk Radio Book of the Year, and the 2019. His current novel, Midnight Black – The Purge was published in January of 2019 Pulp Den Award. He is current at work on his next novel, The White Prize.