You are here: Home / Featured Books / Living in the Middle by A. Robert Allen 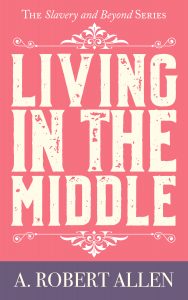 About Living in the Middle by A. Robert Allen

Rejected by his race. Hunted by the Klan. Yet, standing up to hatred is what he’s compelled to do.

New York, Early 1900s: Jimmy Montgomery comes from old New York money and grows up among the Manhattan elite. At the age of eighteen, Jimmy discovers he’s been living a lie. He follows his roots back to Tulsa, Oklahoma to answer the burning questions in his life. Who is he? What is he? Where does he belong? He finds love and friendship along the way, but full acceptance from either the White or the Black world eludes him. When trouble pits the White population of Tulsa against the Black community of Greenwood, Jimmy must finally make a choice—he can no longer live in the middle. His decision will alter the course of his life and those he’d come to love. What will he decide? Pick up a copy to find out.
LIVING IN THE MIDDLE is a powerful African American historical novel based on the Tulsa Race Riot of 1921. If you like passionate heroes, no-holds-barred history, high-stakes emotional tension, then you’ll love A. Robert Allen’s eye-opening story.
LIVING IN THE MIDDLE is a stand-alone story connected by theme to the other volumes in A. Robert Allen’s Slavery and Beyond series.

Author Bio:
A. Robert Allen has published four volumes in his Slavery and Beyond series. All stand-alone novels connected only by theme. He writes historical fiction that transports readers to times and places immediately before or soon after the end of slavery. A. Robert is a long-time higher education professional and resides in New York. His first novel, Failed Moments, is a fictional account of Allen’s ancestors in 1790 during the slave revolution in what would become Haiti and later in 1863 during New York’s Draft Riots. The second volume, A Wave From Mama, immerses readers in racially charged post Civil War Brooklyn and gives an interesting look at the building of the Brooklyn Bridge. The third book in the series, Minetta Lane, takes place in 1904 in a downtown New York neighborhood that lives by an unusual race-based code. His most recent release, Living in the Middle, transports readers to perhaps the most violent and significant incident of racial violence in U.S. history, the Tulsa Race Riots of 1921.