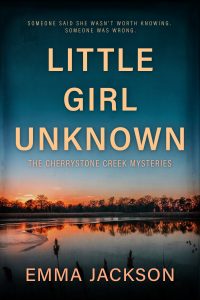 Southern born and bred, Paige Reese plans to escape the stagnant Eastern Shore of Virginia for a big-city career. When Paige’s daddy dies unexpectedly, she agrees to return home to take care of his funeral business. As the acting coroner and mortician for small-town Eastville, Paige has plenty of time to resent her new life while trying to force a pleasant outlook for the locals.

Iraqi-war veteran Nott Smith has deeper scars than his fractured legs admit. Battling severe PTSD keeps Nott busy as he drifts around Cape Charles, collecting and restoring remnants of trash. Always a loner, Nott prefers to let his demons rage silently than to make friends in the quaint bay-side town. Good thing for Nott, Paige isn’t asking to be his friend.

When the unidentified body of a migrant girl is discovered in Cherrystone Creek near Nott’s ramshackle house and the Chief Deputy arrests Nott for the murder, Paige acts on instinct. Her new friend couldn’t be guilty of the crime. Could he?

With more questions than answers, Paige works to uncover the victim’s identity and cause of death, who is responsible, and why the authorities aren’t pursuing the murderer. Then the truth confronts Paige with the ugly possibility that her closest friends are more involved than she realized. Can she avoid becoming the next victim?

Buy the book, and follow the author on social media:
Learn more about the writer. Visit the Author’s Website.
Get This Mystery Book From Amazon.

Author Bio:
Emma Jackson is a new writer. She has been a literary person for her entire life and loves cozy mysteries. She lives in Alabama and on Virginia’s Eastern Shore, where her books are sited.