You are here: Home / Featured Books / Lady Justice and the Raven by Robert Thornhill 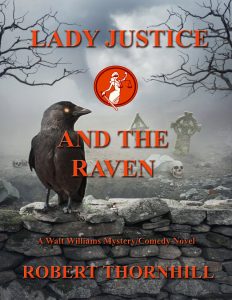 Lady Justice and the Raven by Robert Thornhill

Walt discovers a manuscript hidden in the false bottom of a cabinet Maggie bought at a craft fair. The manuscript, written by a woman named Lenore, tells the tragic story of a life filled with abuse, incest, and finally — murder. Drawn in by the story, Walt becomes entangled with members of the family whose lives mirror characters in many of Edgar Allen Poe’s gothic novels. Accompanying Walt on this curious journey is a Raven that guides Walt through the terrifying and often dangerous encounters with this family whose lives are filled with tragedy and remorse. Will Walt prevail or will he succumb to the evil curse that has plagued this troubled family for four generations?

Author Bio:
Award-winning author, Robert Thornhill, began writing at the age of 66 after a 36 year career in real estate. In ten years, he has published 39 novels in the Lady Justice series, the seven volume Rainbow Road series of chapter books for children, a cookbook and a mini-autobiography.
Nine of the Lady Justice novels received the Pinnacle Achievement Award from the National Association of Book Entrepreneurs for best new mystery novel, nineteen have received 5 Star Reviews from Reader’s Favorite, and twenty-four have been ranked #1 on Amazon in the past twenty-four months
Many of Walt’s adventures in the Lady Justice series are anecdotal and based on Robert’s real life.
Although Robert holds a master’s in psychology, he has never taken a course in writing and has never learned to type. All 49 of his published books were typed with one finger and a thumb.
He lives with his wife, Peg, in Independence, Missouri.