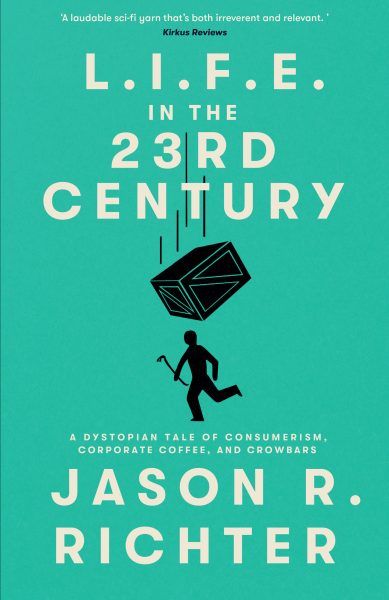 Meet Pat McGewan-X04. Pat is a Patriot who spends his days watching robots build cubicles for corporations that keep getting blown up by those pesky terrorists in the soon to be won, we’ve got them on the ropes, 232nd year of the War on Terror. He’s content in his world of mediocre corporate coffee, vid-link chats with his wife who the government discourages him from ever meeting in person, and an endless barrage of travel bans, terrorist attacks, and never-ending nightly news emergency broadcasts.

But everything changes when a freak car accident puts Pat in the national spotlight. One minute he’s a hero for being the sole survivor of this week’s most recent terrorist attack, (but not long enough to get a commemorative coffee cup with his face on it before the next attack happens). In the next minute, the nation’s most vitriolic talking head has branded Pat the greatest threat to truth, justice, and stockholder profits — and the manhunt begins!

Pat has to decide between fighting the corporate-controlled media and possibly losing his life or giving in to his Academy training and lose his soul and possibly any hope of ever getting a decent cup of coffee. Welcome to LIFE in the 23rd Century: an absurd, light-hearted dystopian future to distract you from your horrific dystopian present. Brought to you by the makers of prescription Chillaxafed.

Buy the book, and follow the author on social media:
Learn more about the writer. Visit the Author's Website.
Get This Science Fiction Book From Amazon.

Author Bio:
Jason R. Richter is a perennial runner-up in Jason R. Richter look-alike contests. The orphaned love child of Kilgore Trout and Margaret Dumont, he was raised by marauding gypsy accountants. When the bottom fell out of the interplanetary death ray market at the dawn of the new millennium, he turned his hobby (a game he calls “Lies to Strangers”) into a career. He currently lives. His novella “I am Leonard and other stories” is available free if you sign up for his newsletter.