You are here: Home / Fantasy / Keepers of the Dawn by Herb J. Smith II 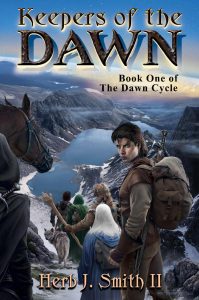 Keepers of the Dawn by Herb J. Smith II

For two thousand years the Teeth have stood, three immense barriers of divine light rising high into the heavens, encircling the world, dividing it from Paradise. Like others of the Penitent world, Dreen and his telepathically impaired son, Bartu, cling to a dream. A dream that one day a savior will arrive to fell the imprisoning Teeth. Unlike others, however, their dream rests on more than mere faith. It rests on the promise of an artifact that came to their family centuries ago. A holy relic that is key to a future savior’s success.
To keep the relic safe, Dreen and Bartu must keep it secret. A task not easily accomplished in this world of telepaths. Making the task even more difficult is an obscure prophecy that foretells of the sacred artifact. A prophecy that Rue-A-Kai, the Destroyer, knows well. With the strength of a hundred wizards, the reincarnated savior of the Vile hordes imperils not only the Penitent kingdoms he now threatens to overrun, but also the promised arrival of a true future savior. Were the demonic Rue-A-Kai to acquire the holy relic, his perverse interpretation of prophecy would transform the relic from a device of deliverance to one of damnation, ensuring that the Teeth never fell, that the world never saw Paradise.
Yet the relic remains safely hidden, as it has for centuries. And there is no reason to believe it will not continue to remain so for centuries to come. No reason at all, that is, until the accident. . . .

Buy the book, and follow the author on social media:
Learn more about the writer. Visit the Author’s Website.
Get This Fantasy Book From Amazon.

Author Bio:
Herb J. Smith II holds a degree in English Literature as well as degrees in Computer Science and Law. Keepers of the Dawn is the first installment of his four-book, science-fantasy epic, The Dawn Cycle. The novel is his third published work.