You are here: Home / Featured Books / JACK by Carter 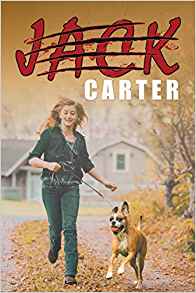 About JACK by Carter

Jack, a loyal and loving Boxer, becomes an out-of-control destructive machine days after contracting rabies from a raccoon in his family’s backyard. Jack attacks his owner, 17-year-old Katy, and her childhood friend, Peyton, and a bloody race for survival ensues as the terrified girls find themselves severely injured and trapped in a bedroom without any means of calling for help.

The life-or-death situation is a shock considering the endearing nature of this story. Jack, a rescue dog, is the perfect companion for Katy and a neighborhood favorite. The two end up being inseparable, often going on long-distance runs together, snuggling by the TV late at night, and spending their free time together – even as Katy gets older and finds her schedule getting busier with a love interest and her and Peyton’s budding cross country careers.

Jack is an extremely loyal and protective dog. He saves both Katy and Peyton from predatory acts and becomes a hero in the neighborhood for his fearlessness.

But one day Jack is left alone outside and is bit behind the ear by a raccoon. When Katy’s mom neglects to take him to the vet, Jack takes a turn. Katy and Peyton notice Jack becoming restless in the backyard. When they open the door, he attacks them and slices into Peyton’s wrist creating an arterial bleed.

Peyton is severely injured but cannot get help as the two girls end up trapped in an bedroom as Jack violently tries to claw his way into the room through the door and nearby windows. Katy tries her best to care for Peyton’s wound, but she has already lost a lot of blood. After several hours, Katy considers shooting Jack with her mom’s pistol but instead works out a daring escape so she can get to her cell phone and call for help.

Peyton runs outside to escape Jack breaking through the bathroom window and collapses on the front lawn.

Jack vanishes. Meanwhile, Peyton is rushed to the hospital and is treated for her injuries. Left to pick up the pieces, Katy works with local animal control to bait Jack out of hiding in a nearby trail. When Jack comes out of hiding, the unthinkable happens.

Author Bio:
Carter is an author and scriptwriter who loves her newfound creative freedom in the entertainment world. Originally an ER nurse, Carter has taken her own life experiences and transformed them into exciting stories of imagination and heroism. Because of her eclectic thirst for writing, Carter takes writing to the next level and is publishing books and screenplays for those viewers who want to be entertained by all genres. Spare time hobbies for Carter include poker and golf.