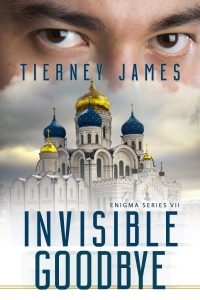 On a calm moonless night, a Singapore airliner carrying several hundred passengers, including twenty of America’s top scientists and engineers, disappears over the Indian Ocean without a trace. Then one day an Enigma agent hiking through the Siberian forests of Russia, finds one of the scientists…alive.
Petrov hates Enigma, the secret intelligence organization that nearly destroyed his life, but duty drives him to inform the US Government he has located the missing scientists. Time is running out to orchestrate a rescue mission and destroy the technology given to the Russians. Petrov’s prize is reuniting with Tessa Scott, who he met in Afghanistan two years earlier and must face an old enemy. He has no qualms about destroying the one person who stands in his way, Captain Chase Hunter.
With her marriage on the rocks, Tessa decides to travel to Russia and assist the new ambassador. Change gives her clarity of what the future will hold as a single mom. When Petrov finds her in the clutches of a sadistic Russian general, she is more than willing to follow him into the wilds of Siberia.
Captain Hunter and his team design an escape plan for the American scientists and hope they don’t start WWIII in the process. Forced to put his hatred of Petrov aside, they work together to ensure military superiority stays in the hands of the US. He soon learns the cost of doing business with his enemy, might mean losing Agent Tessa Scott.

Author Bio:
Tierney James decided to become a full-time writer after working in education for over thirty years. Besides serving as a Solar System Ambassador for NASA’s Jet Propulsion Lab, and attending Space Camp for Educators, Tierney served as a Geo-teacher for National Geographic. Her love of travel and cultures took her on adventures throughout Africa, Asia and Europe. From the Great Wall of China to floating the Okavango Delta of Botswana, Tierney weaves her unique experiences into the adventures she loves to write. Living on a Native American reservation and in a mining town, fuels the characters in the Enigma and Wind Dancer series.
After moving to Oklahoma, the love of teaching continued in her marketing and writing workshops along with the creation of educational materials and children’s books. Try some of her other books to bring a little adventure to your life. http://www.tierneyjames.com Speaking at book clubs, school functions, church and community groups are a few of the things Tierney enjoys doing when not writing her next adventure. She also helps beginning writers in their quest to becoming a published author through her workshops and classes. Family, two adopted dogs and gardening fill her life with plenty of laughter to share with others.
Tierney has been an Amazon #1 Best Selling author and won awards at the Annual Ozark Creative Writer’s Conference as well as the Sleuths’ Ink Mystery Writers.