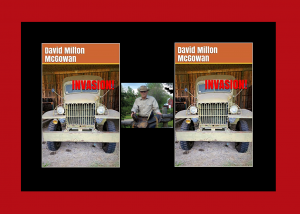 A short story by David M. McGowan
They lived “off the grid” because in those days and in that area there was no “grid” to be on. They were homesteaders, farmers, and trappers who might find a dozen people within a day’s walk in any direction.
Suddenly they were surrounded by10, 000 strangers, almost all men and trading for goods they had not known existed.
It was 1942 and the Alaska Highway was being built through 1200 miles of wilderness.
Their system of life, the society they knew was gone with the arrival of one train in Dawson Creek. There were hundreds of more loaded freights scheduled to arrive in a town that might see half a dozen during the fall harvest.
What will happen to these people?

Author Bio:
David Milton McGowan (D. M. McGowan) is a novelist who occasionally writes rhymes and songs. His stories generally contain Canadian themes since he believes his birth-land doesn’t receive the recognition it deserves for its contribution to the world. In addition the neighbors often receive denunciations that could be equally applied to Canada despite a benevolent reputation and only acceptance of that history might precipitate change.
He has been a cowboy, forest fire fighter, heavy equipment operator, farmhand, gardener, road musician and businessman. He has many years’ experience in the welding/fabrication industries and as a commercial driver. He has lived in several areas in British Columbia, Alberta and Ontario and played music in much of North America. He and Karen are the proud seniors to four children, eight grand-children and two great grand-children
Dave has several published novels, both digital and print, is presently expanding his recorded or audible offerings (narrated by the author) and several short stories some available separately and some compiled in collections. Most work, even a few contemporary shorts can be classified as Western Fiction or Historical Fiction and will include Adventure, Mystery and the building of the Canadian West.
Freemason and Shriner