You are here: Home / Featured Books / Intrusion. A Relative Invasion, Book One by Rosalind Minett 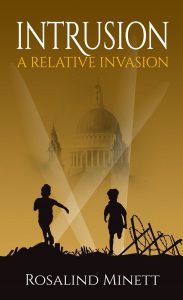 Intrusion. A Relative Invasion, Book One by Rosalind Minett

1937 London. Young Billy Wilson faces impending war when he meets devious Cousin Kenneth. Envious of Billy’s superior strength and material benefits, frail, artistic Kenneth begins his invasion of Billy’s life and their rivalry begins. The parents only see Kenneth’s porcelain looks, not his darker soul. The emotions that enable Hitler’s rise to power – envy over strength, desire for new territory – now ferment in the Wilson home. As war becomes a reality and Kenneth increasingly occupies Billy’s psychological space, Billy turns for imaginary support to a precious Cossack sabre he’s secretly seen. This becomes his icon sustaining him through bullying, separation and hardship, but might it damage as well as protect him?
INTRUSION is the first volume in the trilogy, A Relative Invasion. An early draft was Highly Commended in the Yeovil Prize (novel) and gained a full critique from Harper Collins in their writers’ site: “—a powerful and compelling narrative with strong and relatable characters…”

Author Bio:
Rosalind Minett writes novels and short stories, several of which have been performed in Bath, U.K by WordinyourEar, Story Friday, and others have been included in anthologies.
She is the author of the historical trilogy, A Relative Invasion, set in WW2, and of two short story collections, Me-Time Tales: tea breaks for mature women and curious men, and its companion volume, Curious Men: He-time tales. Her forthcoming pair of domestic dramas: Uncommon Relations, is out at the end of 2019.

Rosalind relishes quirkiness, and loves creating complex characters of all ages, whereas she used to work with them in her career as a psychologist. Her understanding of how people think, learn, feel and behave drives her plots whether the genre is humour, historical or crime.
She lives in the South West of England and spends her non-family time enjoying scenic walks, theatre, sculpting and painting.