You are here: Home / Featured Books / I Once Was Lost, but Now I’m Found by Laura Koerber 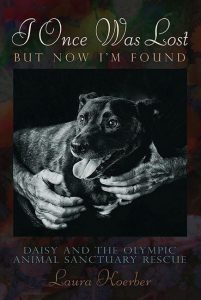 I Once Was Lost, but Now I’m Found by Laura Koerber

The true story of the rescue of over 120 dogs from a fake sanctuary. On the far side of the Olympic Peninsula in Washington State, halfway between the mountains and the ocean, stands the little town of Forks. In that town, in a quiet neighborhood of modest homes and shabby businesses, there remains a dilapidated pink warehouse.

And packed inside that warehouse were once over 120 dogs. Some of the dogs were kept in crates piled high on shelves, arranged in rows along the walls, and shoved into corners behind heaps of garbage and urine-saturated straw. Some of the dogs were confined to wire-sided or glassed-in kennels. One was kept in an old horse trailer. Dead ones were stored in a cooler.

In one of the crates was a black dog named Daisy. This is her story.

It is also the story of the rescue of one hundred and twenty-four dogs—and one snake—from the Olympic Animal Sanctuary, the only large-scale dog rescue in the U.S. to be carried out with no support from local government. The OAS rescue was an epic narrative that extended over several years and featured small town politics, protests, assault, lawsuits, arrests, and a midnight escape, all played out to a nationwide audience.

Author Bio:
Laura is an artist and writer who lives with her husband, her cat, and her two dogs on an island in Puget Sound. She mostly writes in the genre of magical realism. Two of her books have made the Kirkus Review list of one hundred best indy publications and one of her novels won an honorable mention in a national literary contest. I Once Was Lost is her only nonfiction book. All sales proceeds are donated to dog rescues.