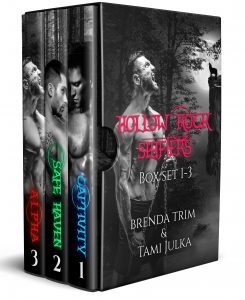 Lawson Scott has been a prisoner for three years. He’s been subjected to torture, degradation, and numerous tests by humans wanting shifter blood. He’s convinced he will spend the remainder of his life chained to a wall until sexy scientist, Liv Kimbro, is assigned to his case. She’s the first human to show an ounce of compassion and their attraction is combustible despite his disdain for her species. An escape plan unfolds and Lawson sees how far Liv will go to set him free. Passion erupts and raw, primal need is unleashed when they succumb to their desire for one another.

Author Bio:
Brenda and Tami grew up on opposite sides of the country and became best friends when their lives brought them both to Texas over a decade ago. They both love everything paranormal, and it was as natural as drinking margaritas the first time they created a world involving a group of dangerously handsome supernaturals. Bringing it to life and writing over fifteen stories surrounding that world has been an epic adventure for them both!