You are here: Home / Fantasy / Generation 150 by Cheryl & Cody Eckhardt 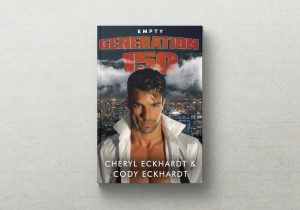 About Generation 150 by Cheryl & Cody Eckhardt

21st century demigods don’t live in clouds. 150 generations ago, the creator was cleaning and sent 7 unused god parts to earth to be born from human parents. Without internal souls, and being completely empty, they learned to mimic every emotion known to humans. Given drop dead gorgeous looks, five men and two women morph into new people anytime they feel like it.
In this life, Ishida Kaho owns the hottest club in Tokyo and goes after any woman he wants. For centuries, sisters Miyu and Harmui have been following him from one life to another. They manipulate and fool men for their amusement. Ishida’s brothers, Paolo and Willem live in Italy and run a lucrative cartel. Matthew Levit is an archeologist living in Washington ,DC . Brother number seven , Akiya is an astrophysicist determined to find answers. . The one goal all have is to get even with the creator for dumping them on earth. Each one uses their shapeshifter ablities to get whatever and whomever they want including making love to an Interpol agent, while destroying two esteemed scientists. This light novel, soon to be a Manga is available on Kindle. Tweet all seven of us at Generation 150.

Buy the book, and follow the author on social media:
Get This Fantasy Book From Amazon.
Visit the Author’s Twitter page.

Author Bio:
This light novel was inspired by Cody Eckhardt’s love of Japanese Manga and Anime. Cheryl is a successful film writer who writes under a pen name. Besides Generation 150 on Kindle, Cheryl has a another book, Mea Culpa, The Sins Of Brother Lyons.
Cheryl and Cody are grandmother and college bound grandson. When we started this, I told him, for this project, we are business partners not grandmother and grandson. It is an extremely rewarding collaboration and he’s sure the Ebook, Generation 150 is going to sell 100,00 copies. email us at generation1504500@gmail.com