You are here: Home / Featured Books / Gaia’s Majesty-Challenge: The Chosen Rise by Roger B. Burt 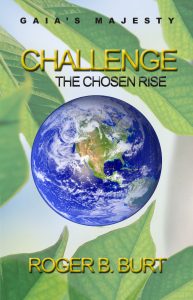 About Gaia’s Majesty-Challenge: The Chosen Rise by Roger B. Burt

But the Tethyan people were not ordinary humans. To insure their safety and future Gaia gave them cities in the sea around the globe. It is these people called Progenitors who gave rise to the mystery of mermaids and most of the Tethyans were women with a few men among them to insure continuity. When in the ocean they had a fishlike tail and could breath in the water. When they returned to their cities they resumed ordinary human form.

Over the ages some of these people came to land and founded families with men they chose. These families were called Primal. Their children might be either Progenitors or Primal. All were dedicated to the mission, but the future of Primals lay only on land.

And among these people on land were the women of the Andromeda. They were the warrior class who served in defense of the Tethyan people and included Progenitors, Primals and some women descended from ancient warrior women such as the Amazon women of the Steppes of Asia or the Viking Shield Maidens.

Gaia’s Majesty-Challenge: The Chosen Rise is the second book of the Gaia’s Majesty Trilogy. The trilogy opens when a young woman discovers that she is Tethyan and finds her birth mother. In turn she meets and falls in love with a man who also did not know he was Tethyan. Slowly their place among the Tethyan people is revealed and it is apparent that they are at the core of the efforts to save a world falling ever deeper into crisis.

The first book Gaia’s Majesty-Mission Called: Women in Power sets the stage for this second book where two children emerge who are core to the mission and a dramatic change in the future of humankind. It becomes clear that the Tethyan people, who are close to the spirit world, will do more than merely guard the future.

Book 1 – Gaia’s Majesty-Mission Called: Women in Power (Available on Amazon in Kindle and paperback. Kindle discounted to $0.99.)
Earth is descending into social and environmental crisis. The mission of the Tethyan people is being called. Gaia has chosen people to play essential roles.

Book 2 – Gaia’s Majesty-Challenge: The Chosen Rise (Available on Amazon in Kindle and paperback. Kindle discounted to $0.99.)
The chosen have borne children with the power to lead the Tethyan people deep into the fight for the future and to open the spirit world.

Book 3 – Gaia’s Majesty-Transformation: Life Forces Revealed (Coming Soon)
The crisis is deep as cities collapse and great numbers of people die in what is called the extinguishment. The Tethyan people have engaged the spirit world and it is apparent that humankind is headed either for their end or a marvelous transformation yet to emerge.

Author Bio:
Roger Burt is a clinical psychologist who believes that it is essential for us to ask “What If” as we explore in ourselves and our world. In his work he has seen the deep resonance of the human mind.

His view of possibilities and what is emerging in human affairs led him to be intrigued by the myth of mermaids. He noticed that mermaids were portrayed in mythology across the globe, but mermen were not prominent. An intriguing difference. And presently it is apparent that women were becoming empowered at last. The story merges the myths of mermaids with the empowerment of women.