You are here: Home / Featured Books / From Me To You by Roshan Singh 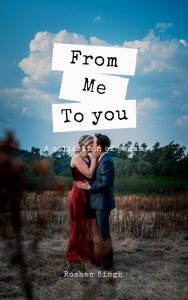 About From Me To You by Roshan Singh

This book is the collection of poems written by Roshan Singh. This poetry book almost cover every thing happening in today’s world. You will find a lot of love poems. Read his poems and get lost in your own world. A world in which you and your life partner only exist. Keep reading, keep loving.

Buy the book, and follow the author on social media:
Get This Poetry Book From Amazon.
Visit the Author’s Twitter page.

Author Bio:
Roshan was born on 26th June 2004. He was just 8 years old when he lost his younger brother who died because of Blood Cancer. His family was living in Bokaro Steel City. He belonged to a middle class family. Roshan when he was 8 years old, he was very naughty. He used to watch Television and no one was allowed to disturb him. If anyone did then he starts crying and if nobody notices then he tries to injure himself by smashing his head on the wall. He was interested in cricket rather than writing. But, in the year 2017 everything changed. He had a crush on his classmate. He used to talk to her and then he found out how to express his feelings for her. He started writing poems dedicated to his crush. He was siting right next to her crush, so whenever he wrote something, she read it. He became famous in his class for his poems. Roshan showed his poems to his English teacher and he appreciated him. His crush left school and at that time he was completely broken. Roshan’s career began when he showed his poems to his English teacher. His English teacher came to his father who was an employee in the same school he studies. His English teacher told his father about his writing skills. His father when reached back home gave him a book named “The Alchemist”. Roshan started reading that book and got inspired. Roshan wrote two books named “Love Defined” and “Friendship Defined” but due to some reasons he unpublished both of the books. After three months he wrote “My Vision”. Roshan reached out to many book publishers, he sent many mails to publishers but no reply came. Some book publishers liked his work but they demanded money. Roshan had no choice except self-publishing. He self published his book on Amazon only. Later, he created “The Journey Series” which included “My Vision” “The Start (currently unavailable)” and one more book which isn’t published yet. In the year 2018, Roshan expanded his writing by publishing his book on Google play, Barnes and Nobles, Apple books etc. He was invited by educreation publishing to publish his book. They gave him 50% discount but he declined it because of his economic condition. Roshan published two more books named “Dream World” and “Perfect” (Maybe the part of journey series). And In the end of 2018, he published “From Me To You” which was a collection of his poems. In the year 2019, he was nominated for the Young Writers Award.