You are here: Home / Featured Books / Duty & Betrayal – The SS Brotherhood and the NASA Connection by Toby Oliver 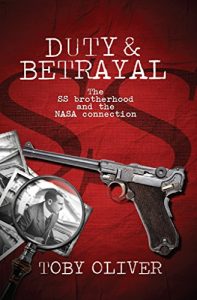 In 1962, the Western powers’ leading scientists meet in London for a conference. A notorious Nazi war criminal is after an attendee from NASA who once worked on Hitler’s rocket program. But CIA agent Jack Stein will stop at nothing to protect him. Meanwhile, Stein’s loyal friend and intelligence source, Spencer Hall of MI5, is consumed with a personal vendetta. Soviet KGB and Israeli Mossad agents are in town too, and the secrets they’re after are nuclear in more ways than one.

Author Bio:
Toby Oliver currently lives in West Sussex, England, with his family and two dogs, a toy Yorkshire Terrier and a King Charles Spaniel. Before he started writing spy novels, he worked for many years as a Government administrator in London. He is the author of Codename Nicolette, Mission Lisbon and Dead Man Walking – A Spy Amongst Us and The Downing Street Plot – An Agent’s Revenge. Duty and Betrayal – The SS Brotherhood and the NASA connection is his latest spy thriller.