You are here: Home / Featured Books / Do Over by Greg Koren 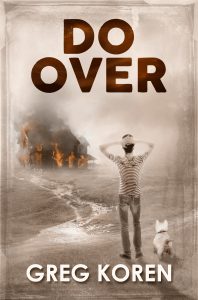 About Do Over by Greg Koren

It’s the day before the most terrifying event of Ben Seebold’s life. And from the moment he first wakes up, it’s clear that this day will be anything but ordinary. Looking down from his bedroom window, he spots a strange man staring up at him through the pouring rain. To make matters worse, he’s got a sister he’s convinced is trying to kill him, and a scratchy throat that isn’t getting any better.

For thirteen-year-old Ben, these problems are just the beginning. Throughout a series of increasingly strange happenings, he’ll face unsettling warnings of upcoming dangers, watch his best friend perform a dangerous stunt, and experience a loss that will turn his world upside down.

At this point, even making Angry Anne laugh wouldn’t help. Ben needs to figure out why this weird stuff is happening and put a stop to it now–before the nightmare truly begins!

Author Bio:
Greg Koren graduated from Towson University in 1988 with a Bachelor of Science degree in English and a concentration in writing. That same year, he began working as a newspaper reporter and columnist in Maryland, first as Associate Editor of the weekly East Baltimore Guide, then, in 1993, as Senior Features Writer for the daily Carroll County Times. During his fifteen-year career, he won more than a dozen awards for his writing, among them the Maryland State Teachers Association’s School Bell Award for excellence in education reporting, the Associated Press’ Mark Twain Award for outstanding features writing, and six awards, including three first-place, from the MDDC Press Association for feature and column writing.
His one-act play, An Arrangement of Convenience, about the difficult subject of AIDS, won the Maryland Playwrights Festival, and in 1989 was produced by the Vagabond Theater in Baltimore to rave reviews.
In 1998, Greg and his wife traded places, and he became the at-home parent. A year later, while writing a weekly column for the Carroll County Times on his experiences as an at-home dad, he decided to homeschool his two kids, making him one of only three homeschooling fathers in Baltimore County.
Greg always loved reading aloud to Max and Mara, and those homeschooling years introduced him to the enchanting world of children’s fiction. He was immediately taken with the powerful storytelling being written for middle school-grade readers and decided he wanted to try his hand at it. Do Over is his first novel. The Memory Trap is his second.