You are here: Home / Featured Books / Deathload by Cy Young 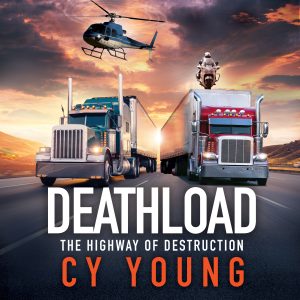 When ex-CIA operative Vincent Fazio’s son is killed by friendly fire in Desert Storm, Fazio takes revenge on the United States Air Force by building two monster trucks filled with Fuel Air bombs and chemical agents and sends them on a rampage across the United States. Their ultimate destination: The White House. When the trucks kill the sister of martial arts champion and Phoenix detective Manny Breen, Breen teams with Phoenix P.D. Department helicopter pilot Sharon Kramer in following and battling the two behemoths. Through many life-threatening experiences, the final battle moves to The White House for the final showdown between Breen and Vincent Fazio. A powerful narrative, a sensational ending.

Author Bio:
Mr. Young began his professional career as a member of the Meryl Abbot Dancers at the Empire Room of Chicago's Palmer House. After a year on the road dancing the “Steam Heat” number in Pajama Game, he repeated the performance in the New York City Center production. He appeared Off-Broadway in The Boyfriend and Diversions and a revue at New York's Blue Angel by Chicago’s Fred Ebb. On Broadway, Cy was featured in a revue, Girls Against The Boys starring Bert Lahr, and was a principal in Subways Are For Sleeping, a Comden & Green musical. Simultaneously, he was a regular performer in revues at New York's elegant Upstairs At The Downstairs nightclub and can be heard on many Upstairs recordings. He is also a featured singer on Ben Bailey's Painted Smiles albums of Rodgers & Hart and Jerome Kern. Next came a national tour of Once Upon a Mattress in which he played Prince Dauntless to Buster Keaton's king, followed by a tour of On A Clear Day starring Howard Keel and Karen Black. Mr. Young stopped the show each night with a spectacular rendition of Wait ‘Til We're Sixty Five. Called to London by Diversions director Steven Vinaver, he starred as Bobby in Sandy Wilson's Divorce Me Darling at the Globe Theatre and can be heard on the original cast album. Cy's most recent performances were in Oklahoma City's Lyric Theater's productions of The Music Man (Mayor Schinn) and George M (Jerry).
Mr. Young has had three plays published by Samuel French and three musicals produced in New York City Off-Broadway. Other writing credits include over 40 radio plays for Heartbeat Theatre in Los Angles, animation scripts for Rankin Bass, 2 optioned screenplays, and 3 children's musicals which he recently produced for performances in the New York Public School system. Cy's song, Draw Me A Circle, is on the Barbra Streisand Third Album and was used to open one of her early TV specials.
Mr. Young is a member of Actor's Equity Association, Screen Actor's Guild, and The American Federation of Television and Radio Artists. He holds an Active Membership in The Dramatists Guild as well as The Author's League of America and is a graduate of Northwestern University.