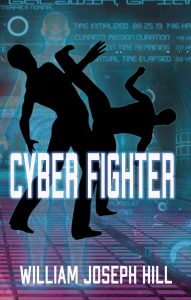 Failed game designer Brian Baldwin has lost his career at Ronin games. He spends his days seeking temp work while stuck in a sedentary existence living off stale pizza and plugged into his game console round the clock.

But when he gets an assignment where he volunteers for an immersive Artificial Intelligence Virtual Reality experiment to be programmed with Black Belt fighting skills from 47 different martial arts, he goes from a total klutz to a real-life action hero!

Brian is framed for a crime that he didn’t commit, which turns him into an international target of assassins, international spies, Triad gangsters, Military Special Forces and even the FBI who all want him more dead than alive.

What if “The Matrix” actually gave you REAL LIFE skills? Would your superhero dreams come true? Or would it be your worst nightmare?

A story about finding your purpose while trying to keep your head…literally.

With great power comes…a bullseye on your back!

Cyber Fighter is a sci-fi martial arts action adventure with a comedic kick…peppered with Monty Python-esque elements, with a dash of Douglas Adams cheekiness and Jackie Chan Kung Fu action.

Author Bio:
William Joseph Hill Jr. grew up a Navy Brat in Southern California and Hawaii, where his family was stationed on historic Ford Island in the middle of Pearl Harbor.

It was the original 1977 Star Wars movie that inspired him to pursue a career in show business as an actor, writer, and filmmaker. He’s written several scripts, both feature films and shorts.

He spent his adolescent years on Ford Island riding the ferry to and from the “mainland” of Oahu to attend school. It was during his Hawaii years when he began his lifelong study of karate and martial arts. He made movies with his younger sister and brothers, using the “exotic” Hawaii locations in their own backyard. His first “feature” film was Law of the Ninja, made while he was still in high school. Today you can see the film on his YouTube channel, Four Scorpio Productions.

William is a film, TV, voice, and stage actor, having appeared in many independent film productions, television shows, reality, and game shows. He lives in Hollywood with his wife and collaborator, the actress Pamela Hill. Together, they founded Four Scorpio Productions, which has produced several short film projects and the hit web series That Darn Girlfriend, available on their Four Scorpio YouTube channel.

William and Pamela write, produce, and star in the series, and take turns directing the various episodes. Their production company is developing the feature film version of Cyber Fighter. Currently as of 2019, they are in pre-production on a short film version of the script.