You are here: Home / Featured Books / COMMANDER – Into the Future, Book 1 by James Heritage 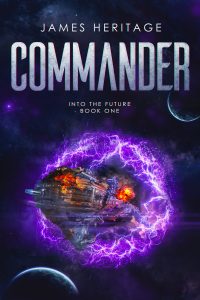 COMMANDER – Into the Future, Book 1 by James Heritage

Expeditionary Marine Lt. JD Rawlings is nearly as battered and hastily patched as the ship he is assigned to, the Navy frigate Rontar. Scars of recent repair are disturbingly visible on both. But that is not the worst of it, by far.

Lt. Rawlings discovered betrayal, an ambush by the alien Shaquaree, but his method of discovery is seen by many survivors as the catalyst which precipitated the battle. The Shaquaree then nearly annihilated mankind's best military and diplomatic personnel in a matter of only minutes. Only one ship, the Rontar, with Rawlings aboard, managed to escape the butchery with an emergency Transition-jump. Rawlings wonders if his next action will be defending humanity against the aliens or himself against the crew members who blame him.

When they appear in the Hylea system nothing there makes any more sense than the shocking treachery of the aliens. The system is supposed to be uninhabited, yet there are EM transmissions from the Earth-class planet. There are supposed to be subspace comms with Earth and the remaining Navy and Marine Fleet, yet there are none.

Alone, barely functional, defenseless, can the frigate, the Navy crew, and the few remaining Marines survive long enough to gain answers to the critical questions? Who is sending the EM signals, and why is the Hylea system shaped differently than the star charts indicate? Did those intractable aliens follow the Rontar to finish the job? Why are the alien Shaquaree so apparently dedicated to wiping out humanity?

Buy the book, and follow the author on social media:
Learn more about the writer. Visit the Author's Website.
Get This Science Fiction Book From Amazon.

Author Bio:
I was raised just outside of Spokane, WA, in the magnificent Pacific Northwest. After making a living by turning wrenches and managing auto repair shops for twenty years, and doing plenty of hiking, camping, and other outdoor activities, I started working for General Motors as a technical trainer, then worked into computer IT positions as a Business Analyst for many years. All of this time, I read prolifically, was married, had some kids, and now reside in central Michigan having retired from GM.

I began writing in April, 2009, shortly after I finished a perfectly terrible book which astonished me at having been published at all. It was horribly written and appeared to be unedited, yet was published by a large publishing house. I thought that even I could write better than that! Then, I thought, Hmmm. Why not? I opened my word processing app and started.

I come from a family of writers, though I did not know it. After my father passed a number of years ago, I inherited several small boxes filled with many pages of longhand writing. It turned out to be numerous short stories and life descriptions from my grandfather about his early years in turn of the century Washington State. There was also a short novel length story written by my father.
As my first writing effort, I took that story from my father as inspiration and wrote a full-length novel. Then, I wrote another. And then another. I could not stop. This writing thing, I found, was addictive!

I currently have written twenty-three novels in multiple genres, and have two novels in progress. A few years ago, some of my beta-readers began pestering me, saying that I should consider publishing. I eventually came around to the idea and began submitting my works to agents.
But, alas, I am not a very good self-promoter and have never really liked marketing or sales. Not a good place for an author to be, right?

But, now I am learning, and trying. Thus, this presentation via Awesome Book Promotions.

I have self-published my first science-fiction novel, COMMANDER, on Amazon, Google, and Barnes & Noble. There is a direct sequel to the first which I hope to publish quite soon, and then six more novels set in the same universe as the first two, but following different characters born from the first.
I also have a trilogy in the fantasy genre, and a duo and trio in the thriller genre.
And more! Visit my website to learn more about all the offerings.