You are here: Home / Featured Books / Civics, Law, and Justice–How We Became U.S.: Insights from a Trial Judge by J. layne Smith 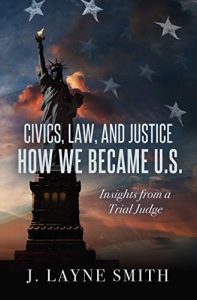 Civics, Law, and Justice–How We Became U.S.: Insights from a Trial Judge by J. layne Smith

If you have questions about U.S. civics, law, and justice but don’t want to wade through dry and dull legalese to get the answers, you will love this down-to-earth collection of essays that provide an insider’s view of the legal system. In Civics, Law, and Justice—How We Became U.S., career trial lawyer and judge J. Layne Smith offers crystal-clear insight and straightforward answers to everything you’ve ever wondered about the art and science of justice in American history and society.

How does a judge feel when handing down a sentence? Which is better: A republic or a democracy? And what do King Henry VIII and his six wives have to do with the U.S. Constitution? Infused with Smith’s warmth, clarity, and humor, this accessible collection will make you feel like you’re learning about U.S. civics, law, and justice while having a cup of coffee with a knowledgeable friend.

Buy the book, and follow the author on social media:
Get This How To & Advice Book From Amazon.

Author Bio:
The Honorable J. Layne Smith is a county judge in Leon County, Florida. A legal scholar, Smith graduated in the top 6 percent of his law school class. He was previously a successful private practice civil, criminal, and administrative trial lawyer for twenty – four years. He then served four years in state government as the general counsel to two Florida state agencies and as a state retirement commissioner. For decades, he has held Martindale-Hubbell’s highest ratings for legal skills and ethics.