You are here: Home / Featured Books / Christianity A Flawed Religion How Christian Dogma Inadvertently Keeps Humanity In Bondage to Sin and A Suffering World and How To Fixz It by Warren William Luce 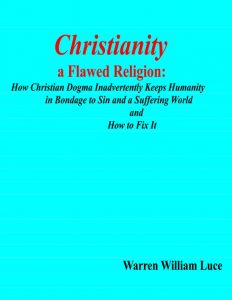 This book shows how Christian dogma has strayed far from God’s word and the teachings of Jesus Christ, the harm it does and what to do about it. That dogma claims that sin is innate in our character, having inherited it from Adam, and there is nothing we can do to change that. Therefore, not being perfect, we are deserving of God’s condemnation to hell.
But God says we are magnificent beings, like Him. We are not at fault for Adam’s disobedience. He says we can turn from any sin, do what is right and good and He will forgive us as long as we forgive others
Jesus said go and sin no more and told us how to do it. He said we are the light of the world, let our good works shine. He said when you show kind caring and forgiving love to everyone, you will enjoy life and your destiny will be heaven.
Based on the words of God and Jesus, this book explores a new reality of religion which, when followed, will make our world better, perhaps even the paradise that was intended for us.

Buy the book, and follow the author on social media:
Get This Non Fiction Book From Lulu.

Author Bio:
Luce is a retired USAF Colonel who has served his country during three wars beginning in WWII when he flew the P-47 fighter bomber in Europe killing people and causing great destruction. After he served a tour in Vietnam, where 58,000 brave young Americans suffered and died in vain, he
began to see the futility of endless wars that solved nothing, only serving to cause suffering, death, destruction and hatred. He became a pacifist, an activist seeking to promote a better world, one way being to reform religion.
Having had a long lifetime of experience with the issues that plague us, he has dedicated the rest of his life to doing something about them, hence this book. He is an optimist believing that humankind will eventually rise to the occasion and bring peace to the world, the destiny that was intended for us. He intends to convince the world that is possible.