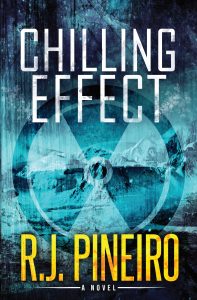 About Chilling Effect by R.J. Pineiro

A RUTHLESS ECO-TERRORIST.
A WOMAN DETERMINED TO STOP HIM.
Chilling Effect, R.J. Pineiro’s newest thriller, explores a world in the not too distant future where terrorism is taken to a new level, one with world-ending consequences.

“Fiction of the first order!”–Clive Cussler
“Fascinating, stupendous, and terrifying.”–Douglas Preston
“Pineiro might just be the next Michael Crichton.” –Guy Durham

You never know what you’re capable of . . . until the monster inside of you pushes you beyond your moral line in the sand.

These are the opening thoughts of former climatologist William Kiersted as he prepares to attack our delicate ecosystem. He is hell-bent on avenging his father’s death and will go to extremes of terrorism never before seen, all to strike a blow to those whose hubris led to his father’s demise. He will take full advantage of the greed and narcissism ever-present in the world, as well as the fragility of our planet to ecological terrorism, and use it to plot a scenario so grim, yet so compellingly real it could have been ripped from today’s news headlines.

Rachel Daly, star of the CIA’s Global Climate Counterterrorism Unit, has tracked Kiersted for months, from the Greenland ice sheet to the streets of Paris and the Siberian plains. She joins forces with SEAL Team Six and Russian Spetsnaz, in an attempt to spoil Kiersted’s plan.

Enter Doctors Natasha Shakhiva and Konrad Malone, experts in the study of the Earth’s permafrost, which gives clues to the planet’s past but also to our future. They are among the very few scientists in the world who understand the global implications of Kiersted’s plan to cripple humanity, if not outright destroy it.

Across three continents, the battle rages in this fast-paced, heart-rending thrill ride whose chilling effect will leave you fearful for the future we’re leaving our children.

“The opening chapter is mind-bending enough, but it only gets better, with cutting-edge science, vivid characters, and a plot that accelerates to a mind-warping-climax. Highly recommended.”
–Douglas Preston, New York Times bestselling author of the Pendergast series of novels

“Pineiro’s vision of what it might be evokes visceral fear.”
–Mark Berent, New York Times bestselling author of Storm Flight.

“Pineiro knows how to move a story right along smartly from one crisis to the next with the tension always building . . . gets right under the reader’s skin so that in the end the payoff is like Fourth of July fireworks.”
–David Hagberg, USA Today bestselling author of Joshua’s Hammer.

Author Bio:
Born in Cuba and raised in Central America, R.J. Pineiro spent his early years in the midst of civil wars before he migrated to the United States in the late 1970s, first to Florida, where he attended Florida Air Academy in Melbourne. There, RJ earned his pilot’s license and high school diploma in 1979, before heading to Louisiana for college.

R.J. earned a degree in electrical engineering from Louisiana State University in 1983 and joined the high-tech industry in Austin Texas, where he worked in computer chip design, test, and manufacturing, before retiring in 2012 to focus full time on his books.

In addition to his high-tech work, R.J. added an instrument rating to his private pilot privileges. He also holds a black belt in martial arts, is a firearms enthusiast, and enjoys the privileges of his Open Water SCUBA certification.

In the late 1980s R.J. began studying to become a novelist. As he read every chance he had, from classical literature to contemporary novels, R.J.’s love of storytelling became uncontrollable. Using an aging personal computer, he decided to start his writing career. Once he began, he never stopped.

His first published work, SIEGE OF LIGHTNING, a novel about a sabotaged space shuttle, was released by Berkley/Putnam in May of 1993. His second novel, ULTIMATUM, about a second Gulf War scenario, was released the following year, 1994, by Forge Books, which went on to publish R.J.’s next 12 novels over the following 13 years.

In 2015, R.J. teamed up with TV News military analyst Colonel David Hunt to kick off the “Hunter Stark Book Series.” The first book in the series, WITHOUT MERCY, about ISIS gaining acquiring nuclear weapons, was released on 3.7.17. The second book, WITHOUT FEAR, about the war in Afghanistan, was released on 8.7.18

​In 2017, R.J. also teamed up with New York Times bestselling author Joe Weber. The result is ASHES OF VICTORY, a novel of global terrorism and international conflict released by Ignition Books on 9.3.18

In 2018, R.J. penned his nineteenth novel, AVENUE OF REGRETS, a mystery revolving around sex trafficking and domestic abuse. Check it out on 11.16.18 from Auspicious Apparatus Press.

In May 2019, R.J. released his brand-new thriller, CHILLING EFFECT, a haunting tale of ecological terrorism.

R.J. married his college sweetheart 35 years ago, Lory Pineiro, an artist and jewelry designer. They have one son, Cameron & Daughter-in-Law Sarah, and two crazy dogs, Coco and Zea.