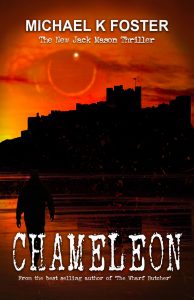 He followed his dreams…into someone else’s nightmare. When a ten-year-old boy stumbles across a woman’s body in a wood, a man at the scene gives chase. Sent to investigate, DCI Jack Mason soon uncovers a darker side. There is always a reason for murder. But when a boy turns out to be an assassin’s number one target, that reason is hard to fathom.

Author Bio:
Michael K Foster has been writing crime thriller novels since 2006, all of them based in and around the North East of England. His bestselling debut novel, ‘The Wharf Butcher,' was released in 2015 and offers a unique insight into this rugged landscape. He has now written five full-length novels and one novella featuring the hard-hitting DCI Jack Mason and local criminal profiler David Carlisle. ‘The Keeper's Pocket,' the latest book in the series, is scheduled for release in December 2020.

Michael was born in Plymouth, England. After ten years' service in the British Army, he moved to Newcastle where he gained a master's degree. A former Magistrate, he now writes full time and lives with his family in County Durham.