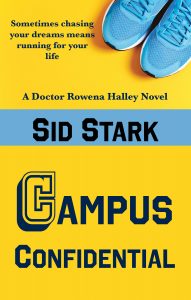 About Campus Confidential by Sid Stark

“Brilliantly-written and highly entertaining, a must read…” The Prairies Book Review

Doctor Rowena Halley needs a job. But it may cost her more than she’s bargained for.

During one of the worst years on record in the academic job market, newly-minted PhD Rowena Halley has, against all odds, gotten a job. For one semester. At poverty wages. In New Jersey. But with so many of her fellow PhDs bagging groceries—or worse—instead of teaching Russian, this is the best chance she has.

New jobs come with a lot of stress, everyone knows that. But Rowena has more problems than just learning her way around a new campus and convincing all these Yankees that yes, she really is from Georgia. Tensions in the department are high, her family wants to know when she’s going to get a decent job and a decent man, and her ex-boyfriend is as usual persona non grata with the Russian government. It’s when students start coming to her for help that she really gets into trouble, though. Rowena got where she is because she wants to help people and save the world, but if she’s not careful, her idealism may get her killed.

Witty and suspenseful in the vein of the Stephanie Plum novels, “Campus Confidential” is an insider’s look at the gritty underbelly of academia, where the struggles are so vicious because the stakes are so small. Only sometimes, they’re a matter of life and death.

Author Bio:
In her other life, Sid Stark lives a life very similar to that of her characters, except with more tedious grading and fewer exciting chase scenes. She did once get held up at Heathrow on suspicion of being a Russian criminal traveling on a fake American passport, though, which was fun.