You are here: Home / Featured Books / Breakthrough : Surviving Alzheimer’s and Why You Can Too by Peter Dredge 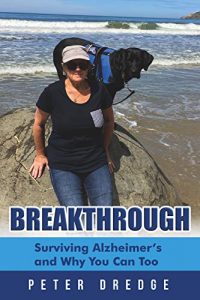 Breakthrough : Surviving Alzheimer’s and Why You Can Too by Peter Dredge

Ann Dredge was a fit, active woman. A keen cyclist and sportswoman. But after being diagnosed with Alzheimer’s disease, she became unable to walk or talk and was expected to die within six months Incredibly, three years later, she’s alert and responding to her carers!

This book is a roadmap for those whose loved ones demonstrate early symptoms of Alzheimer’s and shows that, with determination and dedication, it may be possible to arrest their decline and even recover lost function. It’s an inspiring story, offering hope to sufferers and carers alike. Alzheimer’s is fast becoming the biggest medical, social and financial challenge of this century.

Author Bio:
Peter Dredge was born in Wellington, New Zealand, in 1951. He met his wife Ann at high school in 1967 and the couple married in 1974. Following many years of happy married life including an international sailing adventure, raising three children, building and renovating a number of homes and jointly establishing a number of businesses; Ann was diagnosed with early onset Alzheimer’s in 2012.

Ann’s and Peter’s refusal to accept that, in 2012, nothing could be done to treat Alzheimer’s has taken the couple on an odyssey that led to Ann defying a three-months-to-live end stage Alzheimer’s diagnosis in 2017, surviving when 20 million others haven’t.

Having never written more than a few hundred words in his life except under the duress of assignment deadlines, Peter has now written two books on Alzheimer’s. He is driven by the desire to help as many people as possible realise that, with the right help, an Alzheimer’s diagnosis need not be a journey of despair with an inevitable early demise.

“I’m incredibly grateful: grateful for the time I’ve spent with this wonderful woman, grateful for the life experience that helped us beat Ann’s Alzheimer’s, grateful for the research teams that provided the medical technologies and grateful to have the opportunity to share the story of our journey and our message of hope”