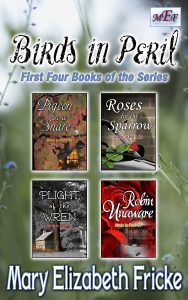 Five women met, fell in love with and married men who aided the arrest and subsequent imprisonment of Sheldon Humsler. Even though the events that disrupted their lives, did not necessarily involve Humsler, they certainly invoked the conviction that one-day Humsler would find a way to enact his revenge. All of these women and the men they married are in some way closely connected to Humsler’s arch enemies, Benton Cromwell, T.J. Harvester and Thad Hunt. Because of Humsler, Benton Cromwell’s life and livelihood have become so precarious he now lives as an invalid on borrowed time. However, his friends, T.J. Harvester and Thad Hunt, continue to grow in family, and in deed. Both are well-loved by many. The time is near when a final confrontation with Humsler must occur. Humsler has an accomplice…someone closely connected to Hunt….but who could that possibly be?

Pigeon in a Snare: He was her knight in shining armor. She was his lost love—the one girl with whom life might have been worth sharing—if another had not told lies deliberately intended to separate them. Now her life is in serious danger. Can he save her? Is their lost love worth the blood and tears it will take to salvage not only themselves but their families and their businesses─ and rekindle the love they lost?

Roses for the Sparrow: It was bad enough that her best friend/employer took off on an extended honeymoon leaving Jani to oversee the building of their new business alone. But in strolls this tall, dark, handsome contractor who makes it clear he intends to become the center of Jani’s attention. But, is Rick too good to be true? Why is he the one who continually finds long-stemmed roses on her car or at her door? What kind of admirer leaves expensive roses to freeze on windshields or be trampled on the floor? Some girls have all the luck- or maybe that’s no luck at all. How often does a girl have two stalkers after her at the same time?

Plight of the Wren: Susie Wrener’s life became front page news when her abusive husband put her in the hospital and sent himself to jail. Three years later, life has returned to mundane, while Susie struggles to maintain a peaceful loving home for her two children as a single mom. Then she meets Ted Harvester and wins the lottery in the same week…

Robin Unaware: Life is constant change, sometimes planned, sometimes instant and devastating. For Stephanie Harvester-Garrett, life takes an abrupt curve when her husband is killed in a car accident.
Determined to secure a stable home for her three children, Stephanie returns to Missouri to be closer to family and to accept employment in her brother’s law office. However, the dream of living a peaceful country life is interrupted by unexpected ghosts of the past, and hatred spawned in the name of love.

Author Bio:
Mary Elizabeth Fricke has lived her entire life within five miles of the Missouri River. She and her husband of 38 years have lived 35 of those years on a farm that has been consistently owned and operated by his family for five generations. They have two grown sons married to wonderful women and two beautiful grandchildren.
A graduate of the Writer’s Institute of America and a member of the Heartland Writers Guild, she has published a number of articles in various forums and magazines, as well as Dino, Godzilla and the Pigs, My Life on Our Missouri Hog Farm. She is also a prolific ghostwriter.
Her stories, based in rural mid-western areas, concern the unique but quickly vanishing way of life on the family farm as well as other mysterious intricacies that evolve life from generation to generation. Romance is her preferred genre.