You are here: Home / Action & Adventure / Beneath the Dragon’s Triangle by Tony Dellamarco 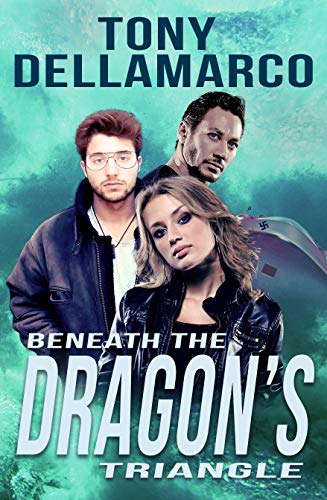 Beneath the Dragon's Triangle by Tony Dellamarco

If you could pound a stake through the heart of the Bermuda Triangle until it appeared on the opposite side of the Earth, you would be in the dreaded Dragon’s Triangle. What better place to hide a weapon of mass destruction?

A simple phone call from a friend at sea throws Andrea, a graduate of Yale University with a PhD in biomedical engineering, into a world of espionage and intrigue. Did her friend, a deep-sea diver working for a company repairing communication cables, really find a mysterious object buried one thousand feet below the ocean’s surface, and could it be of any importance? Why did this phone call from the billions made each day trigger a covert group, a remnant of Nazi Germany, to come out of the shadows to claim this object, and, like a virus, systematically destroy anyone who stands in its way of recovering what it lost so many years ago? The reputation of the Dragon’s Triangle for unexplained events is just beginning a new chapter.

An obvious neophyte in this deadly game where people are starting to disappear, Andrea has nowhere to turn. A chance encounter with a NYPD officer might strengthen her chance of survival. Sean is a retired Navy SEAL officer who teams up with Andrea only to find that they are both in over their heads. The enemy seems to have limitless power, and there is only one person Sean knows who can help them stay alive. He turns to Paul O, a man of great wealth who owns a company that builds ships and satellites for the U.S. government. A private war breaks out with Paul, Andrea, and Sean, pitted against an unknown, fanatical group that takes place in the air, on and beneath the sea, and on land. Will they survive, and if they do, how will it change them?

Three people from different walks of life meld into a tenacious team, never giving up when the chips are down and all seems lost. Who will be the first to sacrifice their life for the others, and does Andrea stay a victim, or does she become a force to reckon with that takes the strongest of men by surprise?

Author Bio:
Tony Dellamarco is an engineer turned teacher turned author. His lifelong passion for writing led to the publication of professional articles throughout his engineering career. He has also written several stories for children, including The Great Race, on understanding the doubling of numbers, two others for a Great Pyrenees periodical, ODE to A Great PYR and Great Bear the Great PYR, and The Little Star and Tubby the Tugboat, that have been read in elementary school classrooms. He completed two additional yet to be published novels, The Raptors and The Cranberry Chalice, designed to capture the imaginations of teenagers and adults alike. A graduate of Arizona State University (ASU) with a bachelor’s degree in business administration, and Mount Saint Mary College, Newburgh, New York with a master’s degree in education, he has years of technological and educational training. His first job was with IBM where he started working in the Quality Control and Engineering departments. After 27 years he finished his IBM career as a senior engineer. He then taught 10th and 11th grade history and science at the Minisink Valley Central School District in upstate New York. Throughout his life he’s been an avid sportsman and has trained in power lifting and a variety of martial arts. At 19 he earned a scuba diving certification and piggybacked a pilot’s license at the same time. When he’s not writing or conjuring science fiction novels, he enjoys teaching his grandchildren how to drive his tractor while working the fields around his home in the Hudson Valley.