You are here: Home / Featured Books / Avenue of Regrets by R.J. Pineiro 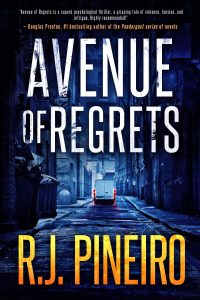 About Avenue of Regrets by R.J. Pineiro

What would you do if you discovered that the violent death of your family seven years ago was not as it had seemed? How far would you go to uncover the truth?

“An engrossing novel of domestic suspense . . . a fast-paced tale of murder and horrific crime with twists and turns Worthy of Hitchcock.” –Publishers Weekly

David Wallace had it all: A beautiful wife, an infant son, and a great career.
Until a tragic mistake ended it all.

Seven years later, David has managed to move on with his life, having started a shelter for battered women. But he’s still haunted by the indiscretion that changed his world forever. He hopes, even prays, that by helping those abused, those living in fear, he might be able to put his dark days behind him.

But on the seventh anniversary of that terrible night, he learns that everything that happened back then-everything-was not as it had seemed. This revelation propels him into a world of unspeakable violence he never knew existed.

Still, he won’t stop-he can’t stop. How could he? Could you? Someone killed your family and for seven long years made you think you were responsible.

But there are dark forces in play demanding a reckoning. Besieged by past demons, David discovers enemies and crimes so heinous and, so far reaching, they threaten to propel him down another Avenue of Regrets.

“A hard-hitting examination of regrets, atonement, and acknowledging sins committed and those imagined.” –Midwest Book Reviews

“Greed, violence, and the hope of redemption are the defining themes of Avenue of Regrets, a non-stop action thriller.” –Foreword Reviews

Author Bio:
Born in Cuba and raised in Central America, R.J. Pineiro spent several years in the midst of civil wars before migrating to the United States in the late 1970s, first to Florida to attend Florida Air Academy in Melbourne. There, RJ earned a pilot’s license and high school diploma in 1979, before heading to Louisiana for college.

R.J. earned a degree in electrical engineering from Louisiana State University in 1983 and joined the high-tech industry in Austin Texas, working in computer chip design, test, and manufacturing.

R.J.’s first published work, SIEGE OF LIGHTNING, a novel about a sabotaged space shuttle, was released by Berkley/Putnam in May of 1993. A second novel, ULTIMATUM, about a second Gulf War scenario, was released the following year, 1994, by Forge Books, which went on to publish R.J.’s next 12 novels over the following 13 years.

In 2015, R.J. teamed up with TV News military analyst Colonel David Hunt to kick off the “Hunter Stark Book Series.” The first book in the series, WITHOUT MERCY, about ISIS gaining acquiring nuclear weapons, was released on 3.7.17. The second book, WITHOUT FEAR, about the war in Afghanistan, was released on 8.7.18

​In 2017, R.J. also teamed up with New York Times bestselling author Joe Weber. The result is ASHES OF VICTORY, a novel of global terrorism and international conflict released by Ignition Books on 9.3.18

In 2018, R.J. penned a nineteenth novel, AVENUE OF REGRETS, a mystery revolving around sex trafficking and domestic abuse released on 11.16.18

In 2019, R.J. re-released his old and first novel, Siege of Lightning, on Kindle and also on a new paperback. He also released on 5.17.19 his twentieth novel, CHILLING EFFECT, a global climate thriller.

R.J. is married to L.M. Pineiro, an artist and jewelry designer. They have one son, Cameron & Daughter-in-Law Sarah, and two crazy dogs, Coco and Zea.