You are here: Home / Featured Books / Avalanche of Love by M. E. Tudor 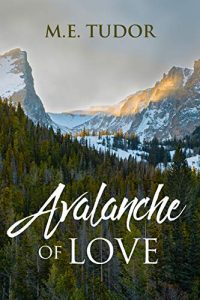 About Avalanche of Love by M. E. Tudor

Back Lands magazine for outdoor enthusiasts has featured Robin Hawke and her outfitting business several times. When her friend, Josie Whittle, the editor-in-chief of the magazine, asks Robin to take a group of writers and photographers out for a week Robin is happy to do it until she finds out that one of the writers going on the trip has never even been camping, let alone gone on a multi-day hike.
After getting fired from a business magazine, her life in ruins, and forced to go home to Colorado where her father has her under his thumb, Marianne Jones is lucky to be writing for anyone. Her new boss at Back Lands magazine, Josie, insists Marianne go out on a weeklong hike with some other writers and photographers from the magazine. The only hiking Marianne does is at the mall and she’s never been camping, so she is not happy about this trip.
Marianne makes Robin mad before the hike even starts, and Robin assumes Marianne is just another snooty socialite forced to work by her parents. Both women try to ignore the sparks flying between them on the trails in vain.
These two women with nothing in common, except broken hearts, are thrown together by fate. Can they find common ground, or will tragedy take away the chance for them to find out what they could have had?

Author Bio:
Originally from west central Indiana, M.E. Tudor now lives in south central Kentucky with her partner, three grandchildren, three cats and an adorable dog. She has two grown daughters who also live in Kentucky and a total of eleven grandchildren, including her partner’s son’s four children. M.E. has lived in Florida, Texas and Colorado during different times of her life and her stories reflect her love of traveling, hiking, camping, and being outdoors in general.

She has an Associates Degree and Bachelor’s Degree from Western Kentucky University and works as a librarian.

M.E. Tudor is a a pen name created from the author’s paternal grandmother’s name. Her grandmother was a story teller in the Native American tradition from which she descended. Being a storyteller is something M. E. inherited and something she has been doing since she was a young child.