You are here: Home / Childrens Book / Artania: The Pharaoh’s Cry by Laurie Woodward 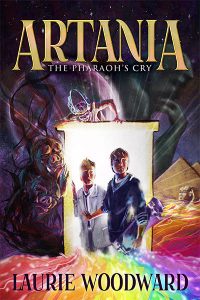 About Artania: The Pharaoh’s Cry by Laurie Woodward

Can a kid who’s forced to bathe six times a day save a magical world? It’s not his fault his father drowned in a mud puddle just before he was born, turning Mother into a cleaning fanatic. Now eleven-year-old Bartholomew Borax III can’t go to school, play outside, or, worst of all, make art. But he has to. So he sketches in secret.
Then two amazing things happen, he’s allowed to go to school and he meets skateboarding painter, Alexander Devinci. In Bartholomew’s book, Alex is wicked cool because he gets needing to create. But sharing glimpses of a freaky world every time they brush past each other makes for a tentative friendship. Meanwhile, Alex’s strained relationship with his mother takes an ominous turn when she has a heart attack, leading Bartholomew to reach out.
Later, during an art museum field trip, a rainbow inside a painting yanks the boys into another realm. Bartholomew’s living in an antiseptic mansion is nothing in comparison to how weird Artania is with living paintings, sculptures, and sketches. It shares some mystical connection with Earth, but is in grave danger. Twelve pharaohs have been captured and if they are not freed soon, an entire Artanian nation will be destroyed. But only Alex and Bartholomew’s powers can rescue them.
No way.
When he sees a struggling Artanian child pulled underground, Bartholomew finally agrees to help, not knowing if it will be enough. With Egyptian gods, goddesses, and warriors at their side, they brave a series of battles, duels, and skateboarding escapes. Bartholomew blunders again and again. Amidst dead and wounded comrades, his guilt grows. As his confidence begins to erode, he must work with Alex but it takes all of his talents and more to battle an evil race of shadowy creatures. For only the power of true creation will finally defeat Sickhert’s army and bring art back to the world.

Author Bio:
“I want children to see their wonder,” says Laurie Woodward. “The magical part, that when nurtured, births amazing things. Films. Paintings. Stories. Song.”
A children’s fantasy author, Laurie Woodward does just that through her books, blog, or work as an anti-bullying advocate.
As a child, she loved climbing trees, pounding her chest while bellowing like Tarzan, and reading about worlds both real and make-believe. Often kept after school for daydreaming, Laurie constantly imagined other worlds. Worlds she began to write about when she got a diary for her eleventh birthday.
For the past twenty-five years she has worked as a bilingual elementary school teacher in Santa Maria, specializing in anti-bullying and peace curriculum. At the same time, she raised her family and worked on honing her writing skills. Since working full-time while being a mother leaves little time for writing, she started a practice of rising early to work on her poetry, stories, and from the early 2000’s, novels.
Living with an artist made her question why our society doesn’t honor creativity. “Because,” as she says, “when we are creating, we are most truly ourselves.” This belief is what eventually lead her to envision a world completely created by art. And her series The Artania Chronicles was born.
Currently, she has four published novels, a co-written memoir with dolphin naturalist, Dean Bernal, as well as poems in the critically acclaimed A Hudson View Poetry Digest, and short stories in California Writer’s Club anthologies.
PUBLICATIONS
• 2010 A Hudson View Poetry Digest Poetry
• 2010 Alternatives to Bullying DVD Peace Curriculum
• 2013 Dean and JoJo: The Dolphin Legacy Cowriter of Biographical Novel
• 2015 Forest Secrets Middle Grade Fantasy Novel
• 2017 The Pharaoh’s Cry Middle Grade Fantasy Novel
• 2017 Shifting Sands: An Anthology Short story. Poetry
• 2017 The Kidnapped Smile Middle Grade Fantasy Novel
• 2018 Dragon Sky Middle Grade Fantasy Novel
• 2018 A Drift of Golden Sand: An Anthology Non-fiction Articles