You are here: Home / Fantasy / Angelfall by P.A. Western-Pittard 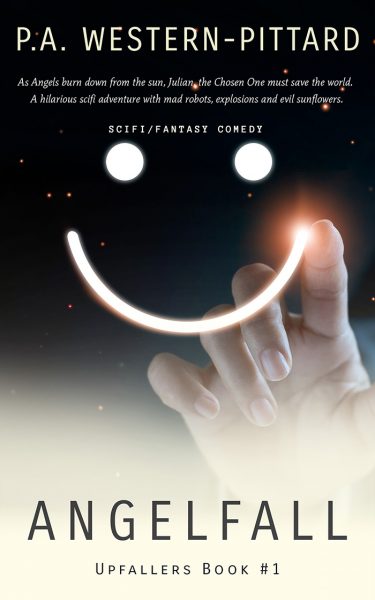 A Hilarious adventure for fans of Terry Pratchett and lovers of quirky fantasy scifi.

What does an Arch Priestess of the War Dragon Temple, a robot with delusions of Godhood, an angel of the apocalypse and a Chosen One all have in common?

Nothing at all. And yet they're the only ones who can stop the end of the world.

We're all going to die.

When angels fall from the sky and devastate the Temple-City of Tarn, Julian (a lazy and lowly acolyte) does what no-one else does: survives being hit by one of these celestial beings.

Immediately declared the Chosen One, Julian teams up with the disgraced Arch Priestess of the War Dragon Temple and sets out on a mission to return the angel to Heaven to prevent the Apocalypse.

Which is easier said than done.

Pursued by a religious fanatic and his warbot, Mike, and guided by the ancient wisdom that the way to get to Heaven is to keep going ‘Up’ Julian begins a reluctant quest that eventually leads to the breathtaking discovery of the most ancient secret of the world.

An uproarious adventure comedy involving cars fulfilling their destiny, giant tree-monsters, a robot that thinks he’s God, evil sunflowers and Murder-Death-Squid-Robots, Angelfall is deliciously silly, smart and will have you grinning until the end.

Author Bio:
The first thing that Paul was ever proud of was writing a story.

He's worked in and around film and television since 1995 in writing and producing roles. All that is very like that very first thing he did, but with bigger budgets.

2019 saw the release of a new comedy novel, and also the Premiere performance of the Sci-Fi Comedy Musical “Illuminati Lizards From Outer Space” which opened the New York Musical Festival in July 2019.

He released his first Novel, Undreamed in 2012, followed by a Sci-Fi comedy, Jan and The Spooky Periscope Incident. In 2014 he released a prequel to Undreamed — Unbeliever. 2015 has seen the release of Lethe Rising, a metaphysical mystery, with shorts and novels releasing fairly regularly since.

Paul writes stories of the mind, for people who like to question reality. Or if you're like him, puzzled by it. You can find him writing as P.A. Western-Pittard, where he publishes comedy and unusual, quirky science fiction/fantasy.